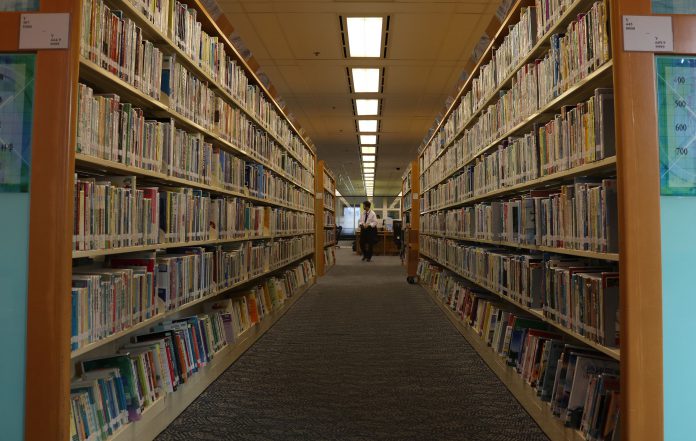 A mountain of boxes block one side of a quiet street. Some are torn, spilling their contents onto the floor. Closer inspection reveals the boxes to be filled with books – with barcode labels and stamped with the chop of “Hong Kong Public Libraries” in Chinese.

According to a January 2014 report in the Oriental Daily newspaper, over 300 such boxes were found near a pavement in Ap Lei Chau. The boxes were sealed with tape from the Hong Kong Central Library and filled with library materials, some close to new and without any checkout records. All of them were marked with the words “withdrawn by Hong Kong public libraries” on their back pages.

The reports drew criticism that the Leisure and Cultural Services Department (LCSD), which manages Hong Kong’s public libraries, was being wasteful. It also prompted the Office of the Ombudsman Hong Kong to launch a direct investigation in January 2016 into the LCSD’s criteria and procedures for the procurement and withdrawal of library materials.

The LCSD later explained to reporters that the boxes, involving nearly 20,000 withdrawn items from the Hong Kong Central Library, should have been recycled by the contractor.

The disposed books turned out to be just the tip of an iceberg. The Ombudsman’s report released in September this year showed that 544,537 library materials were withdrawn in 2013/14, accounting for 4.2 per cent of the total entire library collection during the period of the press reports about the dumped books. The number of withdrawn library materials has ranged from about 336,000 to 860,000 annually since 2009/10.

Simon Cheng Wai-him, the manager of Lohas Book Family, a community bookstore promoting reading culture, worked as an assistant librarian in the Central Library for six months in 2009. He later worked in Tuen Mun Public Library and Sheung Shui Public Library for three months in 2014 in the same position. He says that when he worked in Tuen Mun, he participated in the withdrawal procedure of library materials and witnessed books being dumped in boxes.

Cheng says the materials withdrawn at that time included maliciously damaged books and outdated items, such as old editions of books. There were also old, worn out books, many of them were children books, with missing pages. They were packed in boxes and recycled as waste paper at the end of the year.

The Hong Kong Public Libraries (HKPL) website states that librarians will conduct regular and systematic weeding to identify which materials are to be withdrawn. There are two main targets of withdrawal: old or damaged items, and outdated items.

Frontline staff usually sort out old or damaged items as part of their routine work. Librarians sort through outdated materials from time to time, check whether the sorted items comply with the above withdrawal criteria, and assess whether the damaged items can be repaired and put back on the shelf.

However, Cheng questions this process. “I think they may be subjective in deciding whether this and that are regarded as ‘damaged’.”

Cheng says withdrawn books may still be readable. Instead of being dumped, he suggests they should be donated for community book sharing, or to the underprivileged. “Certainly a lot of manpower is needed for the logistics. Whether the government can and is willing to afford it becomes another matter,” Cheng adds.

Cheng says the HKPL used to hold sales of withdrawn items and he even volunteered in one of them. However, it no longer organises them now and Cheng thinks this is one of the reasons so many books are disposed of and recycled.

According to a written reply from the Home Affairs Bureau to the Legislative Council in June 2009, the HKPL stopped organising book sales to redeploy its resources to district activities in 2007 after it adjusted its annual plans to focus more on local communities’ needs.

The Ombudsman report acknowledges the LCSD has launched some projects to donate books to community organisations in the past two years. However, Rita Lo, chief investigation officer of the Office of the Ombudsman Hong Kong, points out these were just short-term pilot projects and only 400 books were eventually donated in total. She says the LCSD finds the projects cost too much in manpower and resources and is still discussing how to make long-term donations feasible.

In fact, the HKPL has adopted the practice of recycling withdrawn materials according to the Government’s Stores and Procurement Regulations, for years. These regulations apply to stock purchased or acquired by or on behalf of all government departments, such as waste paper and stationery items.

“Books from the public libraries contain a lot of cultural elements,” says Lo, “Our question is, should they be treated according to the same principle as those for waste paper and objects?”

Another shortcoming in the system is the lack of systematic recording and analysis of the reasons for withdrawing individual items. Lo says that although the LCSD maintained lists of withdrawn items for years, it was not until the Ombudsman initiated an inquiry that it revised its guidelines to require staff to list the reasons. But even then, there is a lack of follow-up and analysis.

While many books are disposed of as waste, the total stock of public libraries has continued to grow over the previous years. This despite the fact the lending rate has been dropping. Statistics show that between 2014 and 2016, the total number of loans dropped by around 2 million.

Every year, librarians propose the quantity of Chinese or English materials to be acquired, but they have no need to specify the reasons for acquiring such a quantity. The HKPL adopts a principle set by the Urban Council back in the 1990s that at least 700,000 library items should be acquired annually.

But the Ombudsman’s report reveals the annual number of items procured in the previous years has been exceeding even that target by up to 100,000.

Varsity requested information from the LCSD on its total expenditure on acquiring new library materials in the previous five years. The reply shows a rising trend, from around HK$90 million in 2013-14 to a peak of around HK$102 million in 2017-18.

“I think the biggest problem is they fail to explain why they have to procure that many books,” says Lo, “They [the LCSD] could not provide a reason to explain why the procurement has to be at least 700,000 items.”

Currently, the LCSD’s Collection Development Meeting is responsible for procurement, while the Departmental Disposal Committee oversees withdrawal.  Lo says the investigation found a lack of communication between the two bodies, making it hard to find a balance.

Although public funds are at stake, it appears that most members of the public are unaware of how public libraries manage resources. Varsity designed a quiz of six true-or-false questions to test respondents’ knowledge on how books are acquired or withdrawn in public libraries. One point was awarded for each correct answer and respondents were allowed to select “not sure”.

The final average score among respondents was just 1.42 out of a possible 6 points. Given how little people know about how books are bought and disposed of, it is not surprising that few are active in expressing their thoughts on public libraries’ management.

The Secretary for Home Affairs appoints the Public Libraries Advisory Committee (PLAC) to advise on the formulation of strategies for library development and management. A chairman, a vice-chairman plus 20 members, including government representatives, professionals, academics and community personalities, form the committee. The term of appointment is two years.

Clarisse Yeung Suet-ying, district councilor for Wai Chai’s Tai Hang constituency and chairwoman of the NGO Hong Kong Culture Monitor questions the representativeness of the committee. She also doubts that it can be effective in bringing about any changes because it only meets three to four times a year.

“They may have to handle complicated matters and information within a short time,” she says. “They will never know things as clearly and in as much detail as the librarians who work there every day.”

Legislator Roy Kwong Chun-yu is a current member of PLAC. Apart from management problems, Kwong says he notices that libraries are becoming less appealing to many people. As a writer and frequent visitor to public libraries, he thinks it is a shame that fewer people, especially young people, use libraries due to the increasing reliance on online search engines and electronic materials.

Varsity conducted a survey in October to find out about how people use public libraries in Hong Kong. Results showed that more than 42 per cent of the 458 respondents never visit public libraries. Around 47 per cent visit once or twice monthly. Asked why they do not visit libraries, the most commonly selected responses were “I do not have the need to access public libraries’ books and resources” and “I can get the information I want from the internet” respectively.  Some respondents also pointed out that public libraries were closed when they left work or school.

Roy Kwong says that as reading habits and library use changes, society needs to have imaginative and bold ideas about how to make libraries relevant for our times.

In 2016, Make a Difference (MaD) Social Lab, a non-profit organisation collaborated with the LCSD to launch the LIBoratory project with the aim of creating a more interesting library that truly meets residents’ needs. They described the project as an attempt at “re-imagining the library”. The project, lasting from September 2016 to January 2017, was based at Po On Road Library in Sham Shui Po, with some public libraries’ librarians participating.

It introduced the South Asian Bookshare, a book sharing corner at the library to make more books available to the ethnic minority community in the neighbourhood. Rachel Yan, MaD Social Lab’s project director, says most ethnic minorities don’t see libraries as spaces they can go to, nor can they find books in their languages.

Apart from reading-related activities, MaD also introduced spaces for non-reading activities in their new library design. For example, they included a Maker’s Space, where people could create things, like sewing products or 3D printing.

Yan is optimistic that libraries will be able to adopt more user-focused approaches and eventually become a community hub for all.