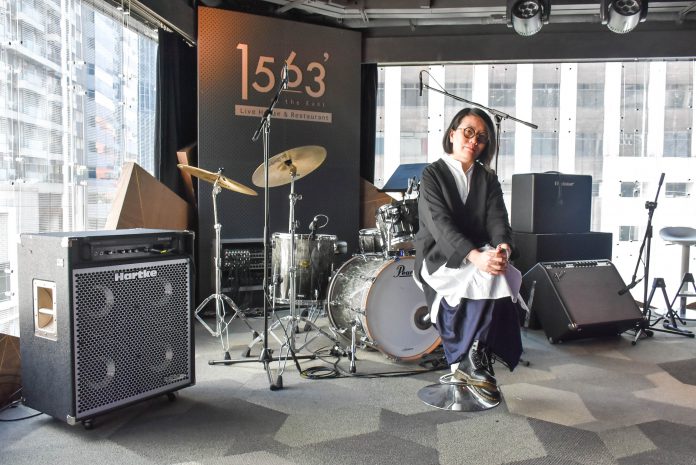 Multi-faceted musician makes a comeback after healing heartache through music

n mid-September this year, singer-songwriter Vicky Fung Wing-ki took the 600 people with her in a concert hall on a musical journey to her inner world. The solo concert, “Travelling Soul 繼續彳亍”, was staged with the HK$207,980 she raised through her crowdfunding platform MusicBee which also covered the cost of an album of the same name. The personal philosophy she wanted to get across over two hours and 20 songs was of “one’s tininess in the universe”.

The show at the Hong Kong Academy for Performing Arts was Fung’s first concert since 2011. That previous concert Vicky Fung’s Second Day/Concert was a gift Fung gave to herself for standing back up after discovering and then acknowledging her son’s autism.

Having worn so many hats in the music industry, the past six years have led Fung to her current philosophy of life. “At this stage in life, I realised that I’m tiny compared to the vast universe. So as long as I keep a humble heart and proceed, any problem can be solved,” she says. Fung founded the music label and artist management company Frenzi Music in 2012, the fund-raising platform MusicBee in 2015, and 1563 at the East live house and restaurant in Wan Chai’s Hopewell Centre in 2016. In recent years, she sees herself as a person who “opens doors” for newcomers in the music industry – she has helped nurture indie pop artists such as Jing Wong, Tang Siu-hau, Michael Lai and Nowhere Boys under Frenzi Music.

But she did not start her career as a songwriter. Succumbing to parental expectations and wishes, Fung studied law and practised it for six years. Her heart though, was always with music and she wrote songs on the side. She composed her debut song “Can’t Let Go 放不低” for Cantopop diva Sammi Cheng Sau-man in 1996 when she was an undergraduate.

Although the song topped the charts on three radio stations, Fung completed her law degree and became a solicitor – and she now feels no bitterness about taking that path.

“In the past, I’d be very stubborn and thought why didn’t my parents allow me to study music? But after two decades, I think the blame is on me because it was me who accepted it,” she says about what was once her biggest struggle in life.

In Fung’s first few years of “part-time” songwriting, she produced a lot of “karaoke songs”; big hits such as her debut Sammi Cheng’s “Can’t Let Go 放不低”, Cass Phang’s “Just because of having you 只因有著你” in 1997 and Priscilla Chan Wai-han’s “Wàn Wèi 玩味” in 1998.

Once she saved enough money to sustain the pursuit of a musical career, she finally took the plunge to give up her stable job and income. It was not plain sailing.

At the beginning, she was pressured to churn out crowd-pleasing pop hits such as Joey Yung’s “Bothering You 麻煩你” in 2001 and Kelly Chen’s “The Best Position 最佳位置” in 2002, rather than music that appealed to her own musical preferences.

It was not until 2005 when Juno Mak’s “Androgynous 雌雄同體” won a flurry of awards from the Composers and Authors Society of Hong Kong (CASH), Roadshow and Metro Broadcast that Fung became determined to persist in her own style of music. The song redefined a non-mainstream style in pop music and proved that non-karaoke songs could win critical and public acclaim.

“Many people told me you should write more pop songs like “The Best Position 最佳位置” and “Can’t Let Go 放不低” , but I just can’t. When I persist in doing things I like and the outcome is not that bad, I learned to pick advice,” Fung says.

At the peak of her career, Fung became a mother. Immersed in great joy, little did she know in what special ways her world would change because of her son’s arrival.

“I found out my son had autism when he was two years old,” Fung says. “When I found out about my son’s autism and realised there was a problem I could never solve, my belief system completely broke down.”

Fung says that for three to five years she lived in a bubble, physically and emotionally stressed from not being able to see her son’s future. As a result, her creative work remained stagnant for years.

During that trough in her life, music saved her. Jerald Chan of the pop duo Swing, whom she befriended through the co-production of a song, questioned her motive for hiding her son’s condition and her struggles. This prompted her to admit that she was doing so not to protect her son, but rather, her own pride.

Chan suggested she reveal this “secret” in order to seek help for her son. This was a major change for Fung who was stubborn, tough and independent. Her way of dealing with problems was to keep them to herself. “I used to think revealing my weakness would make it worse, but my son’s condition forced me to surrender,” she says.

To her surprise, once she opened up about her son’s condition, she received a lot of support instead of mockery. The support she experienced at the 2011 concert made her realise that letting others into her world when she was weak was an opportunity, rather than a threat.

Now, her 11-year-old son is Fung’s muse. “He has his own way of living and a different angle to see and feel the world,” she says. Through observing his behaviour, Fung has experienced epiphanies and gained insights that she would not have had he been an ordinary child.

Fung often takes him out on joyrides to entertain him and it was those rides that led to revelation. She realised her son would look out of the window with the brightest smile all the way, despite having no idea where he was going.

“I wondered if I could be like him on a joyride, smiling to this world from the bottom of my heart without caring how the world looks at me? This is a philosophy indeed,” Fung says with a bright smile. Her new song this year “Crystal Soul 水晶靈魂”, was inspired by the new age book, The Children of Now, which describes children sent from the universe who have crystal-clear souls but their special characteristics make typical ways of communication impossible. Fung was particularly inspired by the book as she also communicates with her son non-verbally.

Even if Fung’s son is unwilling to speak for most of the time and he has difficulties with speech, he loves to sing songs with his mother. People are often amazed at how he can sing an entire song no matter what language it is in.

“You can tell that he’s very curious about the world. It’s only that he’s physically limited so there are things which we cannot comprehend,” she says. Despite his physical difficulties, Fung is not infinitely lenient towards him.

“In many ways he’s a normal child,” she says. “One cannot measure his achievement with a conventional ruler … in fact he cannot be measured by any set of rulers. The only thing I can do is to understand what he’s capable of doing, then add a bit of a challenge each time.”

As a working mother, Fung insists on being there for her son and teaching him as many life skills as possible. Meanwhile, she is trying to figure out ways to help more people understand autism. For instance, her son loves being photographed, and inspired by this she has thought about the idea of starting a social enterprise that recruits children with autism as models.

Fung’s creative ideas to help her son and other children with autism spectrum disorders echoes her creativity in finding ways to support independent and alternative music, such as the crowdfunding platform MusicBee.

Fung’s music, much like the woman herself, often inhabits the frontiers between the mainstream and the non-mainstream. This is probably best exemplified in the hit song she wrote for Juno Mak, the Buddhism-inspired “Vastness of Water 弱水三千”.

“If you stretch out the timeline, you will notice that some ‘alternative music’ will turn into a trend or a movement given sufficient time for it to brew,” she says. That is why she is more concerned about a song’s durability than its chart position in the short-term and it is also the principle that motivates her to run MusicBee. Ultimately, she hopes to “grow MusicBee into a hive”.

With 20 years in the music industry behind her, she can see deeply entrenched problems in its “ecosystem”. She says the local music industry is too commercial. It is unwilling to take risks and explore alternative styles of music that deviate from mainstream pop.

“It’s [based on] a misunderstanding,” she says. “As industry insiders assume the public likes the mainstream style, they keep producing the same kind of songs to please the audience, thinking this formula works because it sells.”

Despite this, Fung is optimistic about the development of Hong Kong’s music industry as she thinks it is easier for independent musicians to gain exposure through social media in the digital age. As Fung’s own life journey shows, doors can open when we adjust our mindsets and open our hearts.