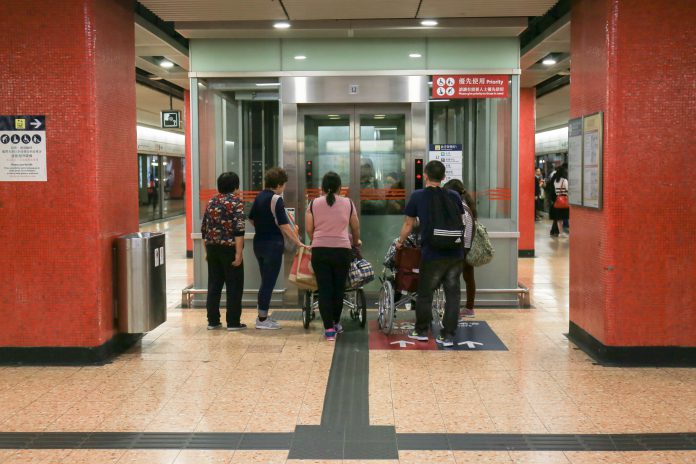 Streets jammed with vehicles, pavements packed with people – Hong Kong is a city on the move. It is also blessed with an efficient and extensive public transport system and it is generally easy to get around. But for those with physical disabilities, what would be a straightforward journey for most of us can be a lot less convenient.

Henry Tam Wing-hang, 23, is a student at the Chinese University of Hong Kong. Tam has spinal muscular atrophy and his mobility is restricted to the four fingers of his right hand. He needs his helper and his electronic wheelchair to go about his daily life.

Tam often takes the bus to get around. Nowadays, most buses in Hong Kong are super-low floor models allowing for easier access from the sidewalk onto the bus for the elderly and people using wheelchairs and walkers. The Kowloon Motor Bus Company (KMB) introduced the world’s first super-low floor double-deckers in 1997 and now most of its fleet is super-low floor.

Wheelchair users do still need assistance from the bus driver to board or alight. The driver needs to leave his or her seat to lower the ramp for wheelchair users to get on and off the bus. In his experience, Tam says most drivers are helpful and friendly and he attributes this to the training and guidelines bus companies provide to their employees.

However, it is a different matter when it comes to his fellow passengers. Tam says passengers are sometimes reluctant to make way for him when he is boarding the bus.

“In fact, the capacity of the area [set aside for wheelchair users] can accommodate several people. If they are already standing there before I come on board, then for sure they are not willing to move,” says Tam.

Fortunately, most of the time, the passengers do eventually cooperate after they are asked to by the driver. But Tam can tell that some of them are displeased by the expressions on their faces.

“There was one time about a year ago, where there was a group of ladies standing in that area on the bus. They didn’t say much when the driver asked them to move away. But when I walked pass them, I heard them murmur, saying that I am ‘annoying and shouldn’t have taken the bus’,” Tam recalls sadly.

Apart from such unpleasant experiences, Tam says safety concerns are another issue to contend with when taking the bus. There is only one seat-belt attached to the disabled seat, and it is not long enough for the larger models of wheelchair, which have become common in recent years. Tam says that to be really safe, there should be four to five locking points to secure the stability of the wheelchair. Knowing that many developed countries have already introduced technologies to keep wheelchairs stable on board, Tam urges the government and public transports operators to review the current designs.

The problems Tam encounters on public buses are not an issue on the Rehab Bus, the rehabilitation bus service operated by the Hong Kong Society of Rehabilitation with funding from the government. However, Tam questions the effectiveness of this service.

Wheelchair users have to book the service several months in advance, as many timeslots are reserved for elderly groups and students at special schools. With such a long waiting period, some are willing to take the risk of hiring privately-owned vans that are modified specifically for wheelchair users.

These privately-owned modified vans are not licensed, regulated or insured to provide passenger services. Yet, service providers freely promote their businesses in online forums. There is no sign the government is cracking down on them and Varsity’s questions to the Transport Department on the matter had not received a response at time of publication.

Tam thinks the fact that people are willing to pay for these vans despite the potential dangers, both physical and legal, illustrates shortcomings in the provision of licensed transportation for disabled passengers in Hong Kong.

Hui Yuk-ching, 44, a member of the Direction Association of the Handicapped, agrees there is room for improvement on the rehabilitation bus service. He thinks there should be a better way to allocate service resources.

Hui says it is common to have a situation where one individual occupies the whole bus and he thinks this is “a waste of resources” when a rehabilitation bus has the capacity to carry up to four wheelchair users and six to seven non-disabled passengers at a time. So, if a user wants to enjoy the services on their own, which they are allowed to, plenty of space is wasted.

To allocate resources in a more effective way, the Hong Kong Society of Rehabilitation recently launched the Pooled Dial-a-Ride Service. The scheme aims to gather and pick up several disabled passengers in a single journey. Hui thinks that can shorten the average waiting time for the service. However, the service is not compulsory and some users may not want to share a ride due to an increase in travel time.

Bookings made long in advance are also needed for Diamond Cab, a taxi service for wheelchair users run by a social enterprise.  Apart from the long waiting time, users also have to be willing to pay a high cost for these cabs. The fare can be three to four times that of a regular taxi.

The wheelchair users who spoke to Varsity say that of all the available transportation options, they and most of their friends prefer using the MTR.

Under the current MTR policy, wheelchair users can ask for staff-assisted portable ramp services to get across the gap between the platform and the multi-purpose space provided in the front carriage. However, company policy dictates that only one wheelchair is assisted in boarding for each train due to time and safety considerations. This is because the MTR thinks it is difficult to handle more than one wheelchair in emergency situations.

In other words, when a group of wheelchair users request assistance from the MTR staff, they need to split up and get onto different trains, rather than different carriages. This has
happened to Hui in the past and he felt sad to have to travel separately from his friends. It also extended their total travel time.

Passengers who need assistance are recommended to give prior notice by calling the control room of the station at which they will board. The staff will then inform the control room about the passenger’s destination. Hui says this communication normally takes enough time for one or two trains to pass the station.

“Sometimes when I am in a hurry I want to get on as soon as possible. But I am not allowed to board immediately. I am a bit impatient under such circumstances,” says Hui.

In fact, many wheelchair users choose to board without assistance in order to save time. Hui thinks this is “no big deal” because they are able to cross the platform gaps themselves at most stations. He only asks for assistance when it is necessary, for example when he is at University station on the East Rail, which has particularly wide platform gaps. There is a reason why most wheelchair users prefer taking the MTR to buses. Hui’s electric wheelchair is too bulky for the buses and he has trouble getting on them. The gangway in the buses can barely accommodate his wheelchair so he needs to be extremely careful when he moves through the bus.

Hui thinks the gangway and wheelchair-prioritised areas on buses are too narrow because the carriages were designed before bigger electronic wheelchairs became commonplace. He is not sure what can be done to improve the situation.

Size is not the only thing that causes problems with electric wheelchairs and other mobility aids, there is also their appearance.

Briton Paul Letters, who works as a part-time teacher at an international school, has had chronic pain in his legs for the past 10 years. Letters now uses a mobility scooter, which he is able to get off from to walk around for short periods of time. He has also used a wheelchair in the past. He says public transport for the physically disabled in Hong Kong is “really weak.”

“That’s one of the areas where Hong Kong is way behind certainly Europe, North America, Australia, New Zealand and probably behind Japan and South Korea as well,” he adds.

Many people think Letters’ mobility scooter is a “cool toy”, not knowing it is a kind of electric wheelchair. He has been questioned more than once by bus drivers and MTR staff, who are supposed to be well-versed in the guidelines and training provided by the companies, when he tried to board. He thinks this is because mobility scooters are rare in Hong Kong.

However, he does appreciate the prompt action by the government to legalise mobility scooters. When he purchased his scooter four years ago, it was actually an illegal item of transport in Hong Kong. After meetings with government officials in 2014, authorities agreed the regulations were outdated and amended the laws to make mobility scooters legal.

Some stakeholders think public transport for wheelchair users has improved in recent years because different government departments and public transport operators are willing to consult passengers with disabilities.

Vicky Ho Hoi-yin, senior organising officer of the Direction Association for the Handicapped, says the Transport Department and the MTR have invited the group’s members to meetings and site visits to see whether the existing facilities can cater to their needs.

Ho says getting around on public transport has been getting easier for wheelchair users but there is still a lot to be done. She stresses that consultations and meetings need to be followed up with prompt action.

Ho’s colleague Elaine Wan Yee Ling, the centre-in-charge at the Direction Association for the Handicapped, points out that barrier-free facilities, such as elevators and ramps, are not only for wheelchair users.
People without disabilities may need to use them as well at different times of their lives. Anyone may need them when they are old and have difficulty in walking or when they are carrying infants, young children and a stroller. Creating a barrier-free public transport system should not just been seen as a matter of rights for people with disabilities, but also an issue that is relevant to everyone.