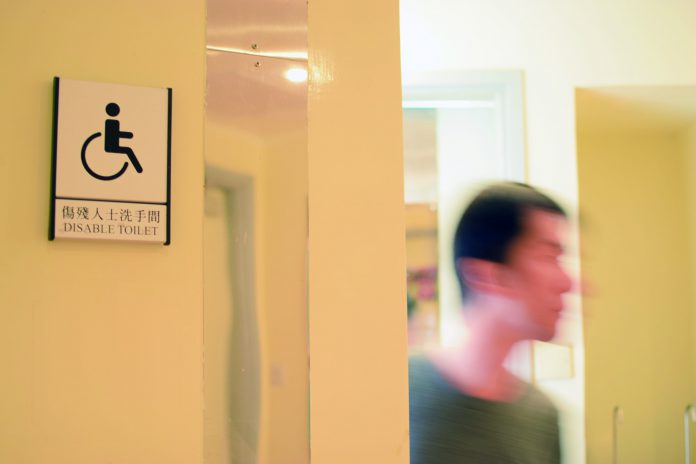 Leung Kin-hong, now aged 60, first noticed something was wrong 10 years ago when he started experiencing abnormal bowel movements. He was later diagnosed as having a malignant tumour and had to undergo surgery to remove the growth near his anus.

As a result of the surgery, Leung was left with a permanent stoma – an opening in his abdomen for the discharge of faecal waste – and needs to use an ostomy bag to collect waste.

When parts of the gastrointestinal or urinary system – such as the colon, ileum and bladder – malfunction due to diseases such as cancer or as a result of accidents, doctors may create similar artificial openings or stoma.

The stoma appears as a pinkish-red opening in the abdomen and in cases like Leung’s, it is in fact an opening of the intestine. To this opening, a stoma patient attaches an adhesive, skin-coloured ostomy bag, which contains a piece of charcoal as a deodorant. There are one-time ostomy bags and also reusable ones. One-time ostomy bags are disposed of after use, while reusable ones have an opening in the lower part which allows waste to be poured out so that the bag can be washed and reused again. A stoma can be temporary or permanent. A temporary stoma is created to allow the bowel or bladder to heal after an operation and can be reversed afterwards.

With support and some adjustments, people with even permanent stomas – who are called ostomates – can lead full and active lives. As Leung Kin-hong points out, activities such as swimming, playing badminton and even soaking in a spa are all possible. But in Hong Kong, ostomates commonly face ignorance, stigma and financial pressures in their everyday lives.

Leung recalls he was once travelling on public transport when he realised his ostomy bag had become detached from his body. “I was on a bus from Tuen Mun to Kwun Tong and I felt a surge of heat along my thigh.” Leung says he panicked and tried to avoid other passengers as he was afraid that the smell would affect them.

Leung says public toilets for the disabled are really important if this sort of accident happens because they at least offer some space and privacy for washing.

However, he points out that unlike Japan, Hong Kong does not have specially-designed toilets for stoma patients. “Toilets in Japan provide cleansing soap…and tailor-made mirrors for [ostomy bag users].”

The fact that people with stomas do not have any outward sign of disability can also lead to misunderstandings when they use toilets for the disabled. “Others do not know we have such need…they say we are occupying the toilets,” says Leung, recounting an experience he had with a suspicious security guard. “People don’t understand [what a stoma is].”

Besides embarrassment and the misunderstanding of others, Leung has also faced discrimination in the workplace. He had to quit his job as a cook after his cancer surgery and after he recovered, a friend recommended him for a job at a local diner. Leung says everything was fine until the employer asked if he had any health conditions. Leung disclosed he was a cancer survivor and that he used a colostomy bag. He was rejected for the job.

Labour Party lawmaker Fernando Cheung Chiu-hung says there is a lack of awareness of the needs of stoma patients in Hong Kong and that regionally, Hong Kong lags behind Japan and Taiwan in this respect. In addition to public ignorance, Cheung says it is very difficult for people with stoma to apply for and receive disability allowances.

This is something 70-year-old Cheung, who prefers not to give her full name, can attest to. After losing 9 kilogrammes in the space of a few months, Cheung was diagnosed with phase-four rectal cancer 18 years ago. She received electrotherapy and underwent surgery to remove the cancerous tissue in her intestine and to create a stoma for waste discharge.

Cheung says the monthly expenses of using ostomy bags are a financial burden. “Even if we are frugal, we could spend around $1,500 per month,” says Cheung. Apart from purchasing the ostomy bags, stoma patients also need various pieces of equipment and products, such as powders and sprays for better adhesion of the ostomy

There are currently two types of allowances stoma patients can apply for, but Cheung points out that neither are easy to get. They are the Social Welfare Department (SWD)’s Disability Allowance and the Pilot Scheme on Providing Special Subsidy for Persons with Permanent Stoma from Low-income Families for Purchasing Medical Consumables. The latter is administered by the Community Care Fund.

The disability allowance is a monthly non-means-tested, non-contributory allowance and there are two types: Normal Disability Allowance, which is HK$1,720 per month, and Higher Disability Allowance, which is HK$3,440 per month. In order to qualify for either, patients must be certified by a doctor to prove that they have severe disabilities persisting for at least six months. Applicants are eligible for the higher rate if they need constant attendance from others in their daily lives.

Doctors base their assessments on a standard Medical Assessment Form designed by the SWD. Under the criteria set by the SWD, those assessed to have 100 per cent loss of earning capacity are regarded as having severe disability. People with stomata rarely meet the criteria, so doctors will consider if they have other medical conditions that may restrict their working capacity when considering whether to sign off their applications.

In Cheung’s case the doctor who performed her surgery in a private hospital completed the Medical Assessment Form but her application for disability allowance was rejected by the SWD.

Cheung says she then tried to seek proof of her disability from the Prince of Wales Hospital, but a doctor there rejected her claim of disability. She even sought the help of several lawmakers and succeeded in meeting the chief executive of the hospital, but this too was to no avail.

Cheung says the worst rejection came from a doctor at the Yuen Chau Kok General Out-patient Clinic. “I faced severe discrimination from the doctors there,” says Cheung. “You don’t look [disabled], you can go to work,” they told her. Cheung says she tried one more time, at the Lek Yuen Health Centre but they rejected her outright.

Cheung did manage to get a doctor’s certification and approval for Normal Disability Allowance in the end, but only after undergoing surgery for acute peritonitis. The condition almost cost her life and she was in hospital for four months. “I used my life to gamble for this,” she says of her disability allowance.

Cheung’s struggle to get disability allowance is not a rare occurrence. Yeung, 70, who also prefers not to give her full name, was diagnosed with colorectal cancer 20 years ago. Her approval for disability allowance was granted, but she has to seek a renewal every two years, even though her stoma surgery cannot be reversed.

Kenny Wong Kin-wah, the executive secretary of the Hong Kong Stoma Association, questions this and other cases where ostomates have been denied permanent allowance. “We wonder why [stoma patients] are not granted permanent disability allowance given they have irreversible conditions.”

The legislative councillor for the Medical functional constituency Pierre Chan Pui-yin, thinks that problem lies in the application system for disability allowance, and the assessment form drawn up by the SWD. “[The criteria] are formulated by the SWD rather than by doctors themselves,” says Chan, who is also a gastroenterologist. He says the SWD’s criteria are too general, which can lead to different doctors making different judgments. What is more, Chan says that in exercising their discretion to sign off an application, doctors have already “crossed a line” and are acting beyond what they are duty-bound to do.

Apart from the disability allowance, ostomates may be able to apply for subsidies through the Community Care Fund’s means-tested pilot scheme to relieve their financial burden. Patients can receive a subsidy of HK$1,000, HK$750, or HK$500 each month, according to their family incomes.

However, Kenny Wong thinks the income threshold and requirements for eligibility are too high. “[Applicants] have to be first proved as permanent stoma patients and second, be non-CSSA recipients,” he says. The amount of detailed information required about the incomes and assets of the applicants and their family members may also deter some would-be applicants, adds Wong.

The hospital also organises a patient self-help group for stoma patients to support one another. Lam says it can be hard for patients to psychologically adjust and accept themselves after their surgery. She stresses the importance of providing accurate information to help them with their recovery. “When we give more information to them, they can realise that they can actually handle [the stoma]…many of them can return to a normal life.”