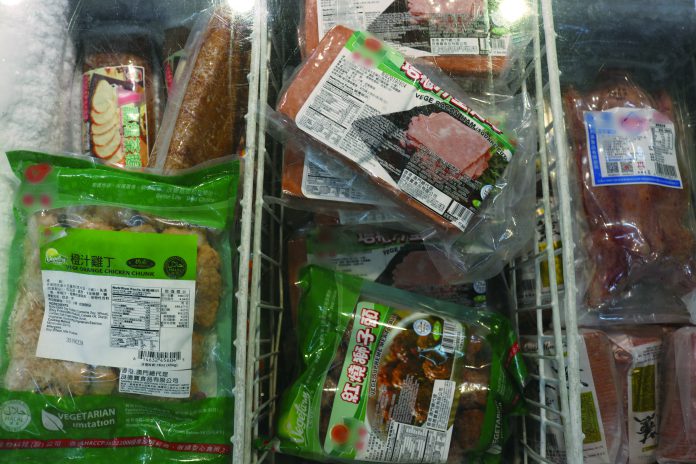 The health risks of fake meat and processed vegetarian foods

It looks much like any other Hong Kong grocery store, but on the glass window next to the entrance is a sign with the Chinese character “vegetarian”. Inside, there are fresh food items ranging from vegetarian sweet-and-sour pork to vegetarian roast meat. The shelves are lined with a variety of seasoning products such as soy sauce and vegetarian oyster sauce. And in the refrigerators, customers can find such items as luncheon meat and sausages with the word “vegetarian” on their labels.

It may be an indication of how much Hongkongers like meat that even the city’s vegetarian food stores stock so many items marketed as meat substitutes. Indeed, statistics show we consume more meat than Americans per capita.

But in recent years, sparked by concerns about health, the environment and animal welfare, more and more people are opting for vegetarian and vegan diets. According to a study conducted by the market research company Ipsos for advocacy group Green Monday in 2012, an estimated 3 per cent of Hong Kong’s population is vegetarian and up to 1.6 million people will adopt a vegetarian diet once a week.

The increasing number of vegetarians and flexitarians – that is people who adopt partially vegetarian diets – is increasing around the world, not just in Hong Kong. This has led to a corresponding increase in the range of food items being marketed towards vegetarians. In the United States alone, sales of food labelled as vegan reached more than US$2 billion last year, an increase of 23 per cent over the previous year.

Violet Man is an accredited dietitian in Hong Kong and Australia. She says that with more people becoming vegetarian, it makes sense that there are more processed vegetarian foods such as meat analogues or fake meat.

“More people want to be vegetarians,” says Man, “Of course, food manufacturing companies, they want to produce more products convenient for vegetarians…so when they chew, the texture and flavours are still like meat.”

Meat substitutes have a similar appearance to real meat and try to approximate the taste and texture of meat. Many such products are made of soy that has been processed to mimic the texture and taste of meat. These meat replacements can make the transition to becoming a vegetarian easier. However, in order to enhance the flavour of these naturally bland products and to preserve them, these processed foods require a lot of seasoning and additives.
As many processed vegetarian foods contain high levels of sugar, salt and sometimes fat, Man says consumers should be careful to check the nutrition content when choosing products.

“If you choose processed vegetarian meals that are high in sugar, high in salt, or high in fat, of course, you exceed the [recommended levels for] fats, sugar and sodium.”

Man warns that in the longer term, over-consumption of fat, sugar and salt is associated with heart disease, type 2 diabetes, hypertension, obesity and elevated cholesterol levels.
Michelle Tan Sze-may, however, is not aware of these health risks. The third-year university student grew up in a Buddhist family and has been used to eating vegetarian meals from a young age. Today, she calls herself a flexitarian. Tan says she likes eating mock meat when she dines out at vegetarian restaurants.

Tan says she is surprised to learn that a meat analogue can contain large quantities of additives and sodium. “I was not aware of that … I think I will not quit completely but I will try to eat less. But I really love those mock meats,” says Tan.

Surgeon Irene Lo has been a vegan for 20 years. She is an active advocate for a raw and whole food diet. She says a lot of chemicals, such as stabilisers, artificial colourings and flavourings are added to meat substitutes in the manufacturing process. While she thinks eating meat analogue products is good for helping people transition to vegetarianism, she says that over-dependence on them can be bad for your health. Yet many people are unaware of the risks.
“Some of the [processed vegetarian foods] are being fried, being overcooked with a high temperature,” says Lo, adding that frying at high temperatures can create harmful chemicals.

Another misconception people may have is to assume that vegetable or plant-based oils are always healthier than animal or dairy fats. In fact, the consumption of partially hydrogenated fats – or trans fats – which are sometimes used to replace butter in baked goods, raises the risk of heart disease.

However, Shara Ng, the chairwoman of the Hong Kong Vegan Association, points out that processed foods in general are unhealthy and therefore vegetarian food should not be singled out. “We cannot say the processed vegetarian food is unhealthy … It is not fair because processed meat is even worse,” says Ng. “It doesn’t matter maybe [whether] it is meat- or plant-based, if they are processed, of course, it is not good for your health.”

Instead, Ng thinks that people should decide on the amount of processed foods to consume according to their own health considerations. She says it is up to individuals to choose the right foods for a healthy diet.

“You should learn about the nutrition thing,” says Ng, “Do your research and you will know how to choose. No one can tell you this one is good and this one is bad.”

Kai Fong, 34, was brought up in a Buddhist family. Fong’s mother introduced him to vegetarianism but today he is vegetarian by choice. He says he is well aware of the health risks in processed vegetarian foods.

“They [processed vegetarian foods] usually have high sodium contents… If you eat too much sodium then, you know it is going to increase heart disease, increase your blood pressure,” says Fong. “I do like lots of processed meat but I know in general that processed foods, they are unhealthy because there are too many chemicals. So nowadays I eat less processed foods.”

The US-born Fong says he reads the nutrition labels whenever he shops for food and tries to avoid sodium and the flavour enhancer monosodium glutamate, or MSG.

Fong agrees with Shara Ng that it is personal food choices that determine a healthy diet.
“I will definitely eat a lot less greasy, fried food. Eat more steamed. If you steam the food, we know that it keeps most of the nutrients. I will try to eat more organic; [it] is probably the right way to go vegetarian,” he says.

In many ways, it has become easier to be a vegetarian, but with greater choice, consumers need to be better informed to make better judgments. Just because something is vegetarian does not always mean it is the healthier option.