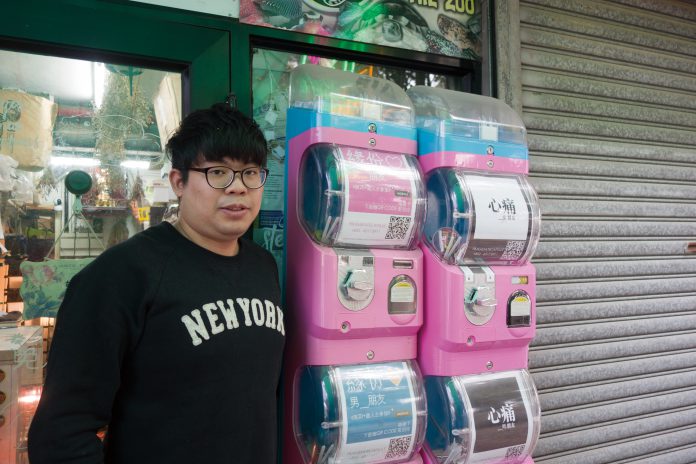 Getting a blind date from vending machines

Insert coins, turn the knob, and… ta-da! Here comes a rounded capsule which contains an appealing little toy that may be an anime figurine or a miniature of food and animals.

Capsule toys, or Gashapon in Japanese, are childhood memories of many Hong Kong people. But have you ever imagined getting a blind date from a capsule toy? The tower of pink capsule vending machines standing outside BT Reptile, a pet store in Shek Kip Mei, does exactly that.

Ben Tang, 26, owner of BT Reptile, came across the idea in Taiwan and decided to set up his own one on Valentine’s Day last year. Named “Fate Capsule”, the machines have sold over 2,000 capsules, with around 20 to 30 users a week.

Paying HK$20, a capsule containing the name and personal details of a date will be spat out from the machine. People who want their information contained in a capsule have to leave their information such as name, age, height, weight, hobby and contact on Fate Capsule’s Facebook page.

Tang says he wants to change the local dating culture with his machines. “Generally, it’s hard to find a partner here since many occupations have long working hours, not to mention the prominent problem of gender imbalance in many industries,” he says. Tang adds that many female users of the machines are nurses or kindergarten teachers, whereas male users are usually engineers or members of disciplined services. These occupations are known for extreme sex ratios.

Do the Fate Capsule machines actually make any successful matches? Tang says he does hear about successful cases occasionally. “We have a withdrawal mechanism. When users are no longer single, they ask us to opt them out from the matching and have their names removed.” He says some couples matched through the machines revisited his shop to thank him.

He has also taken measures to make the matchmaking process safer. Applicants are screened before their information is put in the capsules, and they are only allowed to contact by WeChat through which users can block or reject friend requests. “They have the right to say no,” he says.

Tang introduces the “Pain Capsules” in addition to the original Fate Capsules. The new idea allows users to share their heartbreaking stories with potential dates. While the original capsules are more popular among male users in their 20s, the new Pain Capsules, which contain more than simple personal information, are well-received by female users.

If you want to take a chance to meet a new partner, find the Fate Capsule machines at Shop 208, Kum Yuck Building, 2 Wai Chi Lane, Shek Kip Mei or visit their Facebook page for more information.