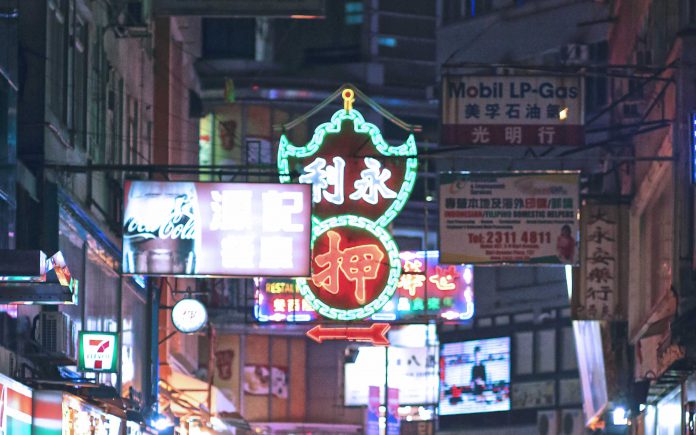 “Neon lights contribute to maximising the colour and attraction of Hong Kong,” says Jin Park, a Korean photographer. Attracted by exotic buildings and harbour views of Hong Kong, Park visits the city repeatedly and thinks neon signs are the major attraction for tourists in the city.

Hong Kong has long been known as “Pearl of the Orient” due to the spectacular night view of neon lights. Park feels sad that neon signs he saw in Tsim Sha Tsui in September 2018 were gone when he went there again in March 2019. “And I can see that many neon signs have been taken down,” he says.

“Neon signs set the mood of Hong Kong in its good old days.”

Since the 1920s, neon-filled streets have given Hong Kong its distinctive atmosphere and act as a backdrop for movies like Chungking Express and Blade Runner.

The colourful signs also serve as the cultural icon of Hong Kong. “I think neon sign is part of our cultural identity. It’s a unique culture of Hong Kong,” says Brian Kwok Sze-hang, assistant professor of the School of Design at the Hong Kong Polytechnic University.

As the author of Fading of Hong Kong Neon Lights – the Archive of Hong Kong Visual Culture, a book which photo-documents remaining signs in Hong Kong, Kwok has conducted comprehensive research on the city’s vanishing neon signs. “When you look up at the sky, you see a unique view created by neon signs,” he adds.

Thanks to the lack of restrictions, neon signs with a variety of shapes, sizes and designs shaped Hong Kong’s distinctive neon landscape. “Japan has a strict policy on neon signs in terms of their sizes, so they’re not as unique and pretty as the ones in Hong Kong,” Kwok says.

However, the golden era of neon signs is gone. It is much harder to spot neon signs in major districts in Hong Kong nowadays. They are either replaced by energy-efficient light-emitting diodes (LED) or taken down by the government as it has stepped up effort to restrict creation of neon signs due to safety concern since 2010.

Apart from government efforts, Kwok thinks that shop owners who own the signboards should also acknowledge the cultural value of neon signs. Due to tightened restrictions and high maintenance cost of neon signs, there is a trend of replacing neon signs with LED signs.

“Shop owners prefer LED signs because they are cheaper, last longer and more colourful. But I think LED lights are too strong and bright,” Kwok says. “Neon signs give out soft and romantic light and they are perfect for the night.”

The drop in demand for neon signs also leads to fewer people joining the neon sign manufacturing industry leading to decrease in supply.

It may seem that neon signs and everything relating to them are slowly being erased from the community. Yet, some organisations are working hard to preserve neon signs culture in Hong Kong while the once neon-filled streets have become neon-free streets in recent years.

One of them is M+, a new visual culture museum in Hong Kong that will be opened next year. It has preserved some traditional neon signs, believing they are the iconic element of Hong Kong’s visual culture. “Given how much they contribute to the landscape of Hong Kong, it will be regrettable if neon signs become less visible in the public sphere,” a M+ spokesperson says.

However, neon signs in Hong Kong have been exposed to the city’s maritime climate for a long time. The high level of salt in the air may corrode them, and that makes it more difficult to preserve old neon signs. The spokesperson of M+ says: “There is definitely collective nostalgia for a time when neon was a vibrant and active craft, and it may only be able to survive as an artisanal skill.”

Defining culture as a living thing that is constantly changing and evolving, the museum believes preserving neon signs may help generate new forms of expertise that can support the creation of neon signs in the future. The M+ spokesperson adds: “Key efforts are devoted to ensure adequate documentation of existing techniques to be used in the future.”

Kwok also points out neon signs need to be preserved: “What’s worthy about neon signs is that they connect the community and the people.”

He adds that some shop owners are willing to keep neon signs though the maintenance cost is high as they mark long history of their shops. “It’s like keeping a promise with the community. Neon signs symbolize honour, respect, and credibility,” Kwok says.