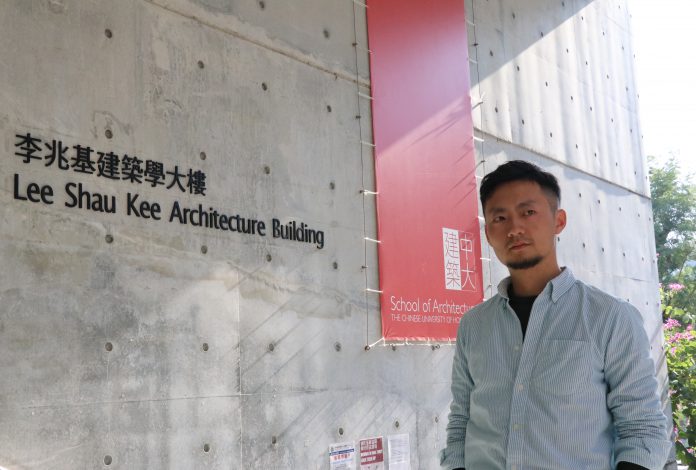 Architectural photographer, Leon Xu, captures the beauty of a building with his knowledge in architecture and art sense.

“As an architect, I think about the building’s physical look, structures, material, and the relationship between people and space. As a photographer, I focus on imagining what buildings look like when I take photos,” Leon Xu says.

Xu, aged 29, wears three hats. He is an architect, a lecturer in the architecture school of the Chinese University of Hong Kong (CUHK), and a photographer. His interest in art design and degree in civil engineering navigated him to take up an unusual role – an architectural photographer.

Xu believes photographers’ training in different disciplines affect their approaches of taking picture. He recalls one of his clients hired three photographers for a shooting project. One of them who studied Arts at university was good at capturing objects in an aesthetic way, but failed to seize the importance of space. Xu learns about space as an essential concept from his training in architecture, and this has a great influence on his productions.

One of Xu’s recent works, Double Wall Pavilion, was exhibited at the 2019 Shenzhen Bi-City Biennale of Urbanism\Architecture. Although this modal has a simple exterior, Xu highlighted: form, materials and elements in it, by applying his photography acumen.

“When I was designing this project, I decided to employ a metal net for the roof. The metal net should be three-dimensional instead of flat. Because this can create a shimmering effect when sunlight reflects on it,” Xu recalls. Architecture photography makes him pay more attention to different spots inside a building.

Another latest work of Xu is a cooperation with HATO Studio for Tai Kwun publication after its major revamp. Xu’s photos are printed on pamphlets for promoting Tai Kwun. This is a unique experience for Xu because he usually works with architects. But this project involves a cultural heritage organization and a graphic design studio.

“Do you know which team of Tai Kwun invited me? It is not the designing team nor curatorial team but the marketing team. Their perception of photos and what they want to convey are different from architects,” Xu explains. When he works with architects, he applies his professional knowledge and presents concepts and highlights of a building in photos. But the marketing team of Tai Kwun requires images that can attract public attention and interest.

Everyone has their living principles and Xu is no exception. There are two principles he lives by when working as an architectural photographer. Xu had his first taste of commercial photography with BEAU Architects, an architecture studio in Hong Kong. The founders and partners of BEAU Architects, who cannot read Chinese, showed their appreciation after seeing a report of his works. “The report only has a Chinese version. They were not touched by my words but my photos,” Xu claims.

He highly appreciates the opportunity to work at BEAU Architects because this studio emphasizes tectonics which is an expression of construction and materiality. This matches one of Xu’s principles – focusing on the quality of buildings.

Another principle is to avoid being proactive when handling clients. He aims to maintain an equal status with his clients but not just a service provider. Xu explains, “The relationship between my clients and I should be built base on their appreciation of my works instead of relying on self-promotion. I think this can safeguard my professionalism.”

The relationship between my clients and I should be built base on their appreciation of my works.

Xu finds defining the boundary of professionalism necessary to ensure autonomy of his works. So he only take pictures of architectures for commercial photography, but not for events and portraits.

Separated by a River

Xu has a taste of living in two proximate cities: Hong Kong and Shenzhen. After finishing his master degree in Shenzhen, he studied a postgraduate course in Hong Kong at Architecture school. Although these two cities are separated by a river,  cultural difference affects all aspects of people’s daily lives in the two cities. During his six years of stay in Hong Kong, Xu has melt into Hong Kong way of life already.

“I like Hong Kong because this city brings a lot of excitement to me. It is a city with a mixture of new and old, traditional and modern, low-income and high-income. Under this situation, plenty of unexpected things can happen,” Leon says. He adds that Shenzhen is a newly developed city that is big, clean and comfortable, but it lacks historical elements.

The limited space in Hong Kong is what Xu finds challenging, as an architect, yet attractive. “When you face a confined space compared to a big and empty room, you will have a completely different design,” Xu says. He is amazed by some narrow stores with only 3 meters width along Hong Kong’s old streets.

More than a Photographer

Living in a fast-paced city like Hong Kong where commercial values often win over art, Xu still has high regards for art. “Art has a high value. Because it can enlighten people. But it depends on if you want to be enlightened or not,” he says. Xu believes art form is an expressive way to portray problems in society and people’s daily lives. Art form might not bring quick improvement, but it can enlighten people.

Art has a high value. Because it can enlighten people. But it depends on if you want to be enlightened or not.