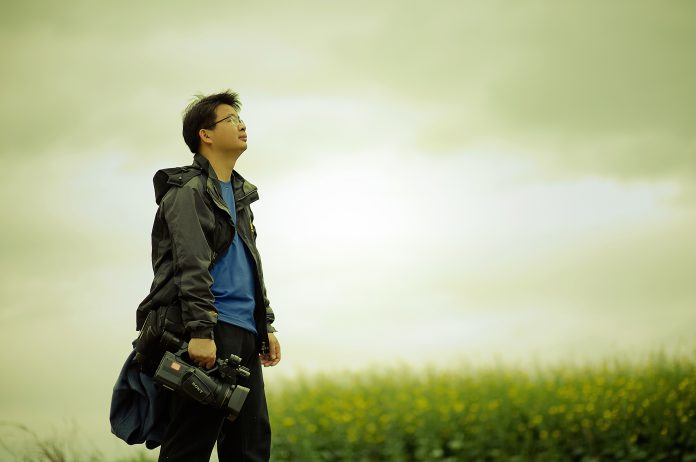 By Savoki Zhang in Jiangsu

Unlike commercial films with easy access to general audiences through cinemas, in China, independent films are usually aimed at a niche market. For independent filmmakers, covering production costs presents a huge challenge, let alone making money from their craft.

Miners, the Horsekeeper and Pneumoconiosis took its director Jiang Nengjie eight years to make before its release in March 2020. But the documentarian chose to publicise his work by sending download links to film lovers who clicked a button marked “Want to watch” when reading about his new project on Douban, a leading review website in China, for free.

The 83-minute documentary explores how the use of illegal explosives and mining without protective gear damaged the health of villagers in remote Hunan. Many of them have contracted pneumoconiosis, which is also known as black lung disease. The incurable occupational disease is caused by the accumulation of fine inhaled particles such as coal dust inside the lung. It tops the list of occupational diseases in China.

Born in a rural village in the central province of Hunan, the 35-year-old documentarian pledges to offer a frank portrayal of marginalised groups such as left-behind children, pneumoconiosis sufferers, the LGBTQ+ community and army veterans who are invisible in society.

Let the Invisible be Seen

Most of Jiang’s works are inspired by his upbringing. The now Guangzhou-based director was born in a mining family. He was also among the first generation of left-behind children who remain in rural regions while their parents leave for work in cities. Jiang has released 10 documentaries since he established his film studio in 2009, among them four are about the subject.

In Miners, the Horsekeeper and Pneumoconiosis, his father and acquaintances from another village, all afflicted with the fatal lung disease, are the protagonists.

As many film junkies praise him for offering an audacious account of the minority groups, Jiang refuses to label these groups as minorities. “The size of each disadvantaged group is actually huge,” he says. “It is possible that you don’t see them in your world, but that doesn’t mean they don’t exist,” he adds.

The National Health Committee of the People’s Republic of China reported that, by the end of 2018, the total number of pneumoconiosis sufferers stood at 873,000. But according to a Beijing-based charity, Love Save Pneumoconiosis, the number already surpassed six million in 2012. “I have no trust in government statistics,” Jiang says.

For the documentarian, what matters most is the actual living conditions of people, not statistics. “Some people are so obsessed with ‘positive power’ that they always focus on what has been improved and solved, while we (independent filmmakers) reveal what is still needed,” Jiang says. “(For instance,) Left-behind children need their parents most, they also need a relatively fair allocation of educational resource system,” he says. “All these problems won’t just be solved by your sensational ‘positive power’,” he adds.

Miners, the Horsekeeper and Pneumoconiosis went viral online overnight when it was launched in March 2020, topping the film reputation chart on Douban, an online screening platform, for two weeks with a rating of 8.6 out of 10. The work has also sparked a bitter debate. Nationalists on China’s Twitter-like Weibo attack Jiang and one of them demanded Jiang’s arrest for his failure to tell stories about China’s ‘good side’. Some, as Jiang recalls, accused him of fuelling Western criticisms against China.

Visibility of Jiang’s documentaries is boosted with more audience. His works are at the same time more vulnerable to be censored, however.

“They (the authorities) sought trouble with me last year. They only banned my films and left me alone this year,” Jiang claims, without further addressing how he was treated.

Jiang has no idea where the red lines lie, but the indie documentary filmmaker vows to navigate the politically hazardous shoals of China’s cultural landscape. “If you don’t advance, you will retreat,” Jiang says.

Chinese authorities have been tightening the noose on independent films over the past decade. On January 9, the China Independent Film Festival (CIFF) declared its indefinite suspension after 17 years, saying it has become “impossible” to undertake such an event amid the country’s current political climate, and that it has completed its “historic mission” of promoting “films for freedom”.

The CIFF was regarded as one of the largest platforms for Chinese independent works. Founded in the eastern city of Nanjing in 2003, the event was staged 14 times, showing around 1,000 films and documentaries with most of them touching on homosexuality and sensitive political issues which are deemed inappropriate or sensitive by authorities.

Stepping on a censorship landmine, Chinese independent filmmakers now find them left with little choice: either altering their works to secure a public release or staying as the embattled nonconformists.

Independent documentary directors in China have long understood that, without a letter of approval of public screening from censors which they call a “dragon seal”, their works will only reach a handful of hardy Chinese fans – perhaps via a semi-underground film screening at a bar or on college campuses. Losing money is inevitable.

Jiang notices that many people are reluctantly leaving the industry over these years. “With channels of distribution stunted by authorities, …no market can exist in the field,” he laments. Documentary filmmakers like Jiang have no choice but to distribute their works privately, while audience can choose to send them cash equivalent of a cinema ticket via QR codes often seen attached under posters of films. “You can even watch my works on pornography websites,” he adds.

Jiang has his feet on the ground despite his ambition in documentary. “I am just a layman in daily life, occasionally pretending to be morally lofty in my works,” Jiang says as he smiles.

Born in an impoverished family, Jiang now has a family to take care of. The documentarian has two children, with the older one just started primary school this September.

Jiang now supports his filmmaking aspirations by making videos for weddings and commercial advertisements. Every dollar counts. Jiang recalls when shooting a wedding video in a village years ago, he tried every means to get an extra RMB ¥50 when the family was only willing to pay him RMB ¥600. Producing commercial advertisements can help finance his ambitions more that he can earn RMB ¥30,000 for one episode though.

“I can just live for money, but that kind of life won’t make me happy,” Jiang says. “On the other hand, I cannot live just for pursuing my ambition,” he adds.

In his works, the documentarian eschews epic documentaries of a society in favour of sensitive examinations of individuals. Jiang wishes to document a wrenching period in the Chinese society. “Some people prefer to use words to express themselves, while some others prefer images. As for me, I use documentaries because it is more powerful,” he says.

“Making documentaries is just my job. The job is neither great nor trivial compared with other ones,” Jiang says.

Having witnessed suffering on the fringe of Chinese society, Jiang remains optimistic. “I will keep on expressing my thoughts as long as I haven’t lost hope in this society,” he says.