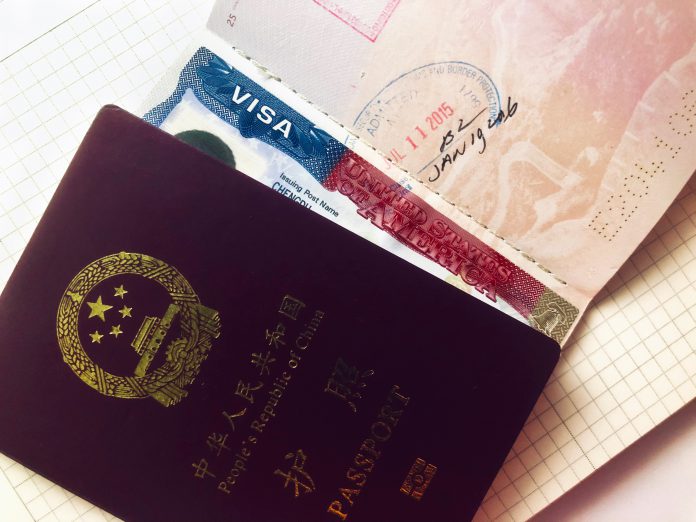 Chinese students who graduated from universities which are listed on the U.S. sanction list are banned from getting student visa.

By Gloria Wei in Harbin & Lynne Rao in Luzhou

On September 9, Ashley Liu* received an email from the U. S. embassy in Beijing informing her that her student visa had been revoked by the U.S. Department of State.

The civil engineering major student returned to China in December 2019 after getting her master’s degree in University of Illinois. Her visa was expected to expire in November this year and she had planned to pursue her P.H.D degree in the U.S. But now she cannot fly to the U.S. without a valid visa.

“I graduated from Beihang University in 2018 and the university is now on the American sanction list,” Liu says. “I broke down when I learnt that my visa was revoked,” she adds. The “Entity List” comprises institutions that the U.S. believes are linked to the Chinese military.

Liu had to cancel her plan of applying for a P.H.D program in civil engineering in the United States after her visa was revoked. She is preparing to file application for P.H.D program offered by the University of Science and Technology of China.

“The stupid policy damages academic freedom because we (students who graduate from universities on the sanction list) cannot go to the U.S. for research and academic exchange,” Liu says. “Trump stated that he did this to prevent Chinese students from stealing technology from America. But why does he punish innocent people?” Liu adds. She regrets going to Beihang University for undergraduate study, as the university is on the sanction list which means she cannot go to the U.S. for higher education now.

“The stupid policy damages academic
freedom because we cannot go to the U. S. for research and academic exchange.”

Donald Trump, President of the U.S., signed a proclamation on May 29, barring Chinese graduate students and researchers who have ties with the People’s Liberation Army (PLA) from entering the United States, claiming to stop China from using graduate students to steal intellectual property and technology from America.

China-U.S. relations have hit historic lows with the world’s two biggest economies clashing over issues ranging from trade and human rights to Hong Kong and the coronavirus.

On 2020 State of the Homeland Address on September 9, Chad Wolf, Acting Secretary of the Department of Homeland Security of the U.S., said, “We are blocking visas for certain Chinese graduate students and researchers with ties to China’s military fusion strategy to prevent them from stealing and otherwise appropriating sensitive research.”

Foreign Ministry Spokeperson Zhao Lijian critizised the U.S. for revoking visas of Chinese students and reseachers in a regular press conference of Ministry of Foreign Affair of People’s Republic of China on September 10. “The measures taken by the U.S. government blatantly harm the legitimate rights and interests of Chinese students in the U.S., which are outright political persecution and racial discrimination and seriously violate the human rights of these Chinese students,” Zhao said.

Jay Yang* was another student affected by the presidential proclamation. Yang received an email informing that his visa application was rejected by U.S. embassy in Bern, Switzerland on August 31, 2020. “It was not surprising. But I still felt upset when I knew the result,” Yang says. He graduated from Harbin Institute of Technology, one of the universities on the sanction list, in 2017.

Yang graduated from a university in Switzerland with a master degree this year. He refused to reveal the name of the university. Yang was admitted to a P.H.D program in Computer Science in the University of Chicago in February and now he is attending classes online. “I planned to study in the U.S. when I was an undergraduate,” Yang says. He thinks his visa application should not be rejected since the U.S. stated that the sanction only targets ‘sensitive subjects’, which are linked to national security such as Material Science and Defense Engineering. “It is unfair because my major is computer science and it is not sensitive,” he adds.

He hopes the U.S. will change its visa policy after the election. “I considered studying in other countries if nothing changes next year,” Yang says.

Daxue Consulting, a market research and management consulting firm focusing on Chinese market, published a report titled “Education elsewhere: China seeks out exchanges in other countries” on June 23, 2020. The report found the U.S. remained the top destination in the past few years because of the high quality of the U.S. education. Also, many Chinese students hoped to stay and live there after graduation in order to enjoy the lifestyle of a developed country.

Yet according to English Learning, a multimedia news platform widely known as EL, American universities are starting to see steep declines as political tensions between the two countries escalate. Several universities in the U.S. have reported drops of 20 per cent or more in the number of new admission from China this fall. At the Bentley University in Massachusetts, the number of new Chinese students arriving for graduate level work dropped from 110 last autumn to 70 this fall. As a result, officials from Bentley University are wondering whether all of its graduate programs can survive.

Ya Waning, manager of an agency based in Beijing, has helped students studying overseas to apply visa for more than 15 years. Ya realises graduates from universities on the sanction list cannot obtain study visa. “It is just a waste of time to apply for American universities unless Biden wins the election and changes the visa policy,” he says.

Sam Qi*, who graduated from the Harbin Institute of Technology (HIT) in 2018 used to dream of going to the U.S. for higher education in the field of civil engineering. But since the HIT is one of universities on the sanction list, he thinks his visa application will not be successful.

Qi has applied for other universities in the U.K. and Canada as his backup plan. “I’ll be thrilled if I can get the visa for studying in the U.S., and I’m still praying for it,” Qi says.

“I’ll be thrilled if I can get the visa for studying in the U.S., and I’m still praying for it.”