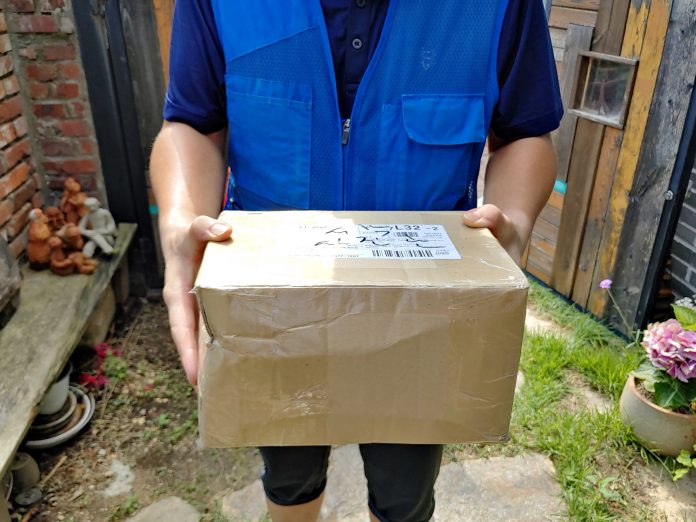 The rise of online shopping during the pandemic has made couriers in South Korea overwork. The unbearable pressure of parcels is pushing them into a corner.

“I have to deliver 300 parcels a day. I cannot work without taking muscle relaxer,” Lee Hyeong-goo says. The 55-year-old courier in South Korea has been working in delivery service for two years.

More and more consumers are shopping online for daily necessities and food such as sanitisers, bottles water or fresh sushi and have them delivered to their doorsteps.

“My daily workload jumped by 30 per cent,” Lee says.

The average daily working hour of courier stretched to 14 hours a day during the pandemic, as people are urged to practice social distancing, and many are working from home. “Most couriers including me work for more than 12 hours a day these days,” Lee says.

Lee’s daily work starts at 7 a.m., loading up a truck with parcels to be delivered. At 12 p.m., he starts dispatching parcels to consumers. It is already 9 p.m. when he can finally go home after all parcels are delivered.

“My whole body is in pain every night. It strains my leg to deliver heavy parcels where there’s no lift (at some locations),” Lee says. Despite of the heavy workload, most couriers do not have any day off. They can only rest on Sundays and public holidays. “We don’t even have time to eat lunch or dinner. I sometimes grab some snacks from convenient stores and eat in my truck when I’m extremely hungry,” he adds.

A labour union of delivery workers demanded logistic firms to offer an official holiday for couriers. Four major logistic companies in South Korea – CJ Logistics, Hanjin Express, Lotte Global and Logen – and Post office finally designated August 14 as ‘No Parcel Day,’ amid surging workload in the wake of the COVID-19.

For the first time in 28 years since delivery service was introduced in South Korea, delivery workers were allowed to take a day off on August 14 – Friday. The government and the firms will also make August 14 a rest day for couriers every year. “With the Liberation Day on August 15, we all had three days off for the first time. I did nothing during the long weekend and just stayed at home and let my exhausted body rest,” Lee says.

Consumers also support couriers for having their first official holiday, uploading #it’s_okay_to_be_late on their social media. President Moon Jae-in also posted ‘No Parcel Day’ on his twitter on July 18, 2020. “We should keep hard working couriers who are taking the leading role in overcoming the COVID-19 in our minds,” he tweeted.

“It’s heart-breaking to see young couriers dying from overwork. I’m afraid that I could be next too,” Lee says.

“It’s heart-breaking to see young couriers dying from overwork. I’m afraid that I could be next too.”

Kim Se-kyoo, who is in charge of education and promotion of the labour union of delivery workers says most of the death cases did not have record of suffering from chronic diseases and they worked for more than 14 hours a day before they died. For the latest death case, the concerned delivery worker had to deliver 400 parcels a day. “We believe there are cases that are not made public,” Kim says.

The labour union is worried delivery workers will have heavier workload in the coming months because shipping volume reaches the peak between September to November every year.

In a bid to prevent workers dying from overwork, the labour union is demanding logistic companies to hire supplementary workers for doing parcel classification which is a long and tough process before actual deliveries are made. In the long run, the labour union is planning to discuss with the government about introducing legislation to address the issue of long working hours.

Couriers at the Blind Spot in Law

According to the labour union of delivery workers, the average weekly working hour from this January to August of couriers is 71.3 hours. This is 1.9 times higher than the average working hour of workers of other professions and is much longer than the 52-hours workweek scheme that Korean government regulates.

The Labour Standards Act is applied to company with more than five employees. However, delivery service workers are not protected by the law, as couriers are regarded as self-employed workers (special contract worker), but not employees of a company.

Kim vows to fight for a better working environment for delivery service workers. Established in 2017, the labour union has combated unreasonable and unfair issues for 45,000 couriers face. “Many offices where parcel classification work is done didn’t even have toilets in the past,” Kim says.

“Logistic companies do not recognise couriers as their employees. We really hope these companies will offer a better working environment and treatment to couriers,” Kim says.

“We are still in the process of fighting for couriers to be recognised and treated like other normal employees,” Kim says.

Kim Jee-youn, a photographer who loves taking photos of marginalised people in society held an exhibition ‘Parcel Service’ in Jeonju, South Korea, praising their contribution to the country.

“I was so surprised when my parcel was delivered to the doorstep at 11 p.m.,” says Kim, explaining why she held the exhibition.

“The shipping volume surges during the pandemic. I read several news articles regarding the working conditions of couriers. It was poorer than I thought. So, I started taking photos of parcels I have received for the photo exhibition,” she says.

The exhibition – ‘Parcel Service’ held between September 9 and October 10 this year showcased photos of parcels, illustrations of work structure of parcel service, screenshots of news articles and piles of parcel boxes.

“I wanted to give a courier a bottle of juice in hot summer. But he was too busy that he had to leave my place right away. So I took a picture of his back and showcased the photo in the exhibition,” Kim says.

“We always seek fast and convenient service, but I believe that we need to think of those who provide this speedy service for us all,” Kim says.