Home Issue 160 My Wife is Having an Affair with Mirror 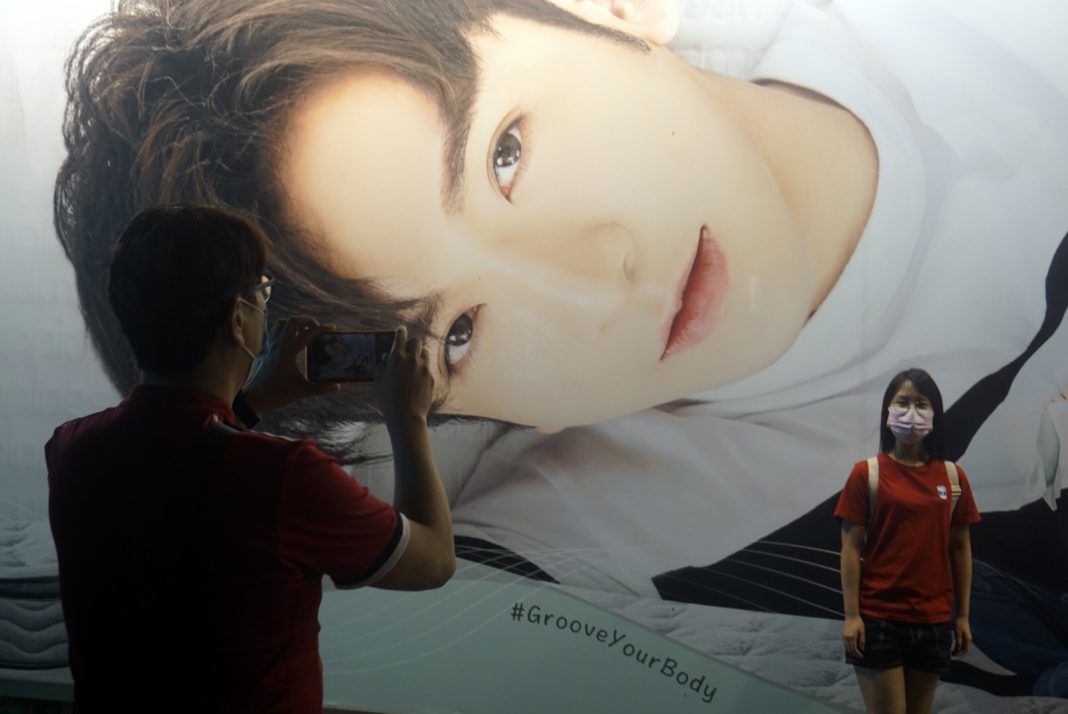 Mirror, a local Cantopop boy band formed after ViuTV’s talent contest King Maker has become so popular in the city that it has been accused of “ruining” thousands of marriages by stealing many married women’s hearts.

One of the “victims” who asked to be identified by his nickname RC, is a 32-year-old man who married his wife two years ago. His wife is madly in love with Keung To, one of the most famous members in Mirror who is 10 years younger than him.

“One night at dinner time, my wife started talking about Keung To as she always does. This time I finally could not stand it and set up a Facebook group named ‘My Wife Married Mirror and Left My Marriage in Ruins Concern Group’ as I wanted to share my ‘plight’ with my friends, who are also the ‘victims’,” RC says.

But he has never expected that so many married men share his feelings. “I set up the group on the night of July 3. At first, there were only a few group members. The number soared to 10,000 the next day. It only took a week for the group to have over 280,000 members,” he says.

Groups members name themselves “ex-husbands” as their wives have been too obsessed with Mirror members and have emotionally abandoned their husbands.

The Joy in Depressing Times

The Facebook group, now with over 300,000 members, has become extremely popular among married men with similar experience. “Ex-husbands” share stories on how their wives are madly in love with Mirror.

“My girlfriend hopped on a bus with Keung To’s advertisements, and she is screaming now, what should I do?” a member said in a post dated September 19.

“My wife bought all products endorsed by Keung To – from Pandora to ice cream mooncakes,” another ex-husband shared in post dated on August 5.

“My wife was not very crazy (about Keung To) at the beginning. She just kept talking about Keung To every day. After I set up the Facebook group, she has been putting up more and more Keung To posters at home,” RC says. “Our wedding photo in the living room is now replaced by a Keung To poster,” he sighs.

RC says he actually did not feel upset at the beginning. “As long as she doesn’t spend all her time watching Keung To’s music video and reading Facebook or Instagram posts about him, it is still acceptable,” he says. “But she keeps testing my limit,” he smiles wryly.

RC admits that it is stressful to manage the group, as the number of followers grows. Mental support from group members has become his motivation.

“People message me to say thank you because they have a lot of fun reading posts in the group. Then I realize a small step I take can bring joy to many, so I journey on,” he says.

“I hope this group can spread positivity to Hongkongers as we have experienced depressing times in recent years. When people talk about this group, I hope they can think of something happy,” RC says.

I hope this group can spread positivity to Hongkongers as we have experienced depressing times in recent years.

“I don’t mean to ask people to escape from reality, but I hope they can be a bit more relaxed,” he adds.

A “Ruined” or Happier Marriage?

One of the “ex-husbands” who found comfort in the Facebook group is Alex Yuen. He described the group as “the source of joy”. His wife Vikaroonie Wong is a fan of Ian Chan Cheuk-yin, one of the main vocals in the boy band.

“After reading stories shared by the ‘ex-husbands’, I know my situation is not that miserable. She only puts up Ian’s posters at home,” he laughs.

The couple has been married for six years with two kids aged four and two. Their marriage has been “ruined” after Wong watched “We are the Littles”, a ViuTV drama about young volleyball players featuring Ian Chan Cheuk-yin, a 28-year-old member in the boy band.

“I wondered who this charming guy was when I was watching the drama! Then I found out he is Ian, then I became a die-hard fan,” Yuen’s wife says. “He is so handsome when he plays volleyball,” she says.

“To be frank, I didn’t have any hard feelings. If being a fan of Ian can make my wife happy, then let’s do it,” Yuen explains.

Yuen joined a Mirror event to get a capsule toy of Ian in April as he wanted to give a surprise to his wife.

“My wife always tells me that Mirror has a great variety of fans – from young girls to daddies – so I thought it would not be awkward to go there. But when I arrived, all the fans were young girls, and I was the only uncle standing there! That embarrassing moment was beyond words,” he recalls.

“It is just a joke to say Mirror ruined our marriage. Actually, we have chatted more because of Mirror,” he says.

If being a fan of Ian can make my wife happy, then let’s do it.

From Dislike to Appreciation

“On her birthday, I ordered a cake with ‘Happy birthday from Anson Lo’ written on it and retouched our photos, replacing my face with Anson Lo’s,” he says.

“She was extremely happy. I guess she might not be that happy if I had given her a luxurious bag instead,” he says.

Lam says he did feel annoyed when his wife first became Anson Lo’s fan and they even argued. But his impression towards Mirror changed after watching the Ultimate Song Chart Awards Presentation (叱咤樂壇流行榜頒獎典禮) held by Commercial Radio Hong Kong on January 1, 2021.

“But I was touched after watching the awards presentation. More and more Hongkongers treasure our local culture in recent years, so when Mirror said they wanted to sing more Cantonese songs for Hongkongers, I started to appreciate them,” he says.

More and more Hongkongers treasure our local culture in recent years, so when Mirror said they wanted to sing more Cantonese songs for Hongkongers, I started to appreciate them.

Sally Choi, team leader in counselling at the Caritas Family Crisis Line and Education Centre, who has five years of experience in marriage counselling says, “It seems it is just a joke to say people’s marriages are ‘ruined’.”

“When your spouse falls in love with an idol, one might feel jealous, but it may improve the marriage as they can have more topics to discuss with each other,” she says.

But there are some couples who have conflicts. Choi believes the reason causing these conflicts is because they think their partner has changed.

“For example, their partners may spend their time going to their idols’ events instead of doing house work,” she says.

“Try not to complain and understand why they have these changes. Everyone should communicate with their partners,” Choi suggests.

It seems it is just a joke to say people’s marriages are ‘ruined’.