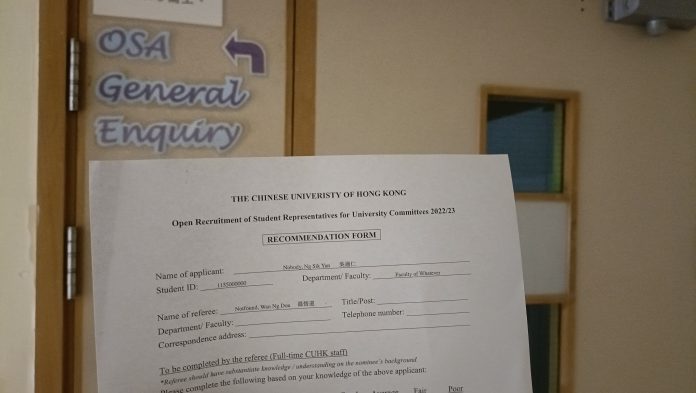 The move came nearly a year after the last cabinet of the Student Union of The Chinese University of Hong Kong (CUSU) resigned in March 2021.

The selection criteria for the representatives consist of staff recommendation, relevant experience, reasons for application and academic performance, according to an email sent to all students from the university’s Office of Student Affairs (OSA) on January 19, 2022.

Among them, a recommendation by a full-time CUHK staff takes up to 40 per cent of the score.

“Respective committees reserve the right to have final decision upon the nomination/appointment of the student nominee(s),” reads the announcement.

According to the email, the application period originally ends on February 10, 2022. But CUHK extended the recruitment exercise to March 21 after it had not received enough applications.

Among the 25 university committees open for recruitment, representatives in 24 of them used to be recruited by the CUSU, whose cabinet was elected by all CUHK students.

Peter Chan*, formerly a member of the CUSU Council, criticises the selection system for lacking representativeness.

“It is quite funny. Passion is more important than ability or recommendation when selecting a student representative. One’s ability cannot simply be measured by recommendation or academic performance such as grade point average (GPA),” he says.

“Now all the university’s decisions seem to come out of the blue. We used to say that the student union is a messenger. Now that messenger is gone,” Chan says.

The CUSU is one of the many university student unions in Hong Kong that have been dissolved or become defunct since July 2021.

In July 2021, the University of Hong Kong announced that it would not recognise the status of its student union.

The Education University of Hong Kong made a similar decision in January 2022, further ruling that the student union’s HK$9 million deposit will be placed under the “temporary care” of the university.

The City University of Hong Kong required its student union to vacate its premises by February 14, 2022. The student union held a “farewell ceremony” on campus that day. The police stated on February 20 that the event may have breached the National Security Law as seditious slogans were displayed, adding that its National Security Department has been investigating the case.

The Office of Student Affairs (OSA) of CUHK has taken over the student union after its dissolution on October 7, 2021.

Founded in January 2022 and initiated by a group of students, the CUHK Students’ Joint Platform (SJP) is a platform to discuss school affairs when the CUSU is defunct.

The organisation is composed of more than 20 student organisations, most of which were affiliated with the CUSU in the past.

The organisation collects opinions from students, holds sessions for students to discuss school affairs, such as mandatory vaccination in the university and student organisations’ registration under the OSA, and acts as student representatives to negotiate with the university administration.

Silva Lam*, a member of the standing executive committee of the SJP, thinks the OSA cannot replace the CUSU.

“The OSA does not even have the full list of student societies and needs to ask us for it. They do not know whom to approach to explain the situation. I do not think they can handle the aftermath brought by the dissolution of CUSU within a year,” she says.

“I think the system is weird. Being good at studying or having a good relationship with university staff does not mean being a good representative. Some students, especially freshmen who do not know the staff well but want to get involved in student affairs, may be filtered out by the system.”

Lam says some helpers of the SJP took part in the student representative recruitment.

“Although they understand the influence of student representatives is very limited, they still think it is a way to express the opinion of students,” she says.

The SJP has now proposed a framework for a new CUSU if there will be any. The blueprint will allow student societies to have a bigger say in all affairs.

Responses from Administrations and Authorities

Responding to Varsity’s enquiry, CUHK says it acknowledges the constitution of the CUSU is in place and will welcome a new student organisation “that upholds CUSU’s tradition in serving not only the student community but also society more broadly.”

The university adds that it believes participation in student organisations and “a prominent student voice” are important in students’ university life and it will ensure these activities are well supported.

The head of the CUHK OSA, also known as the University Dean of Students, has not responded to Varsity’s request for comments.

The Education Bureau says the government respects universities’ autonomy over student affairs in a written reply.

“At the same time, the Government requests universities to uphold good governance and accountability to the public, while their operations should comply with the law and meet the interests of the university community as well as the community at large,” it reads.

*Names changed as requested by interviewees