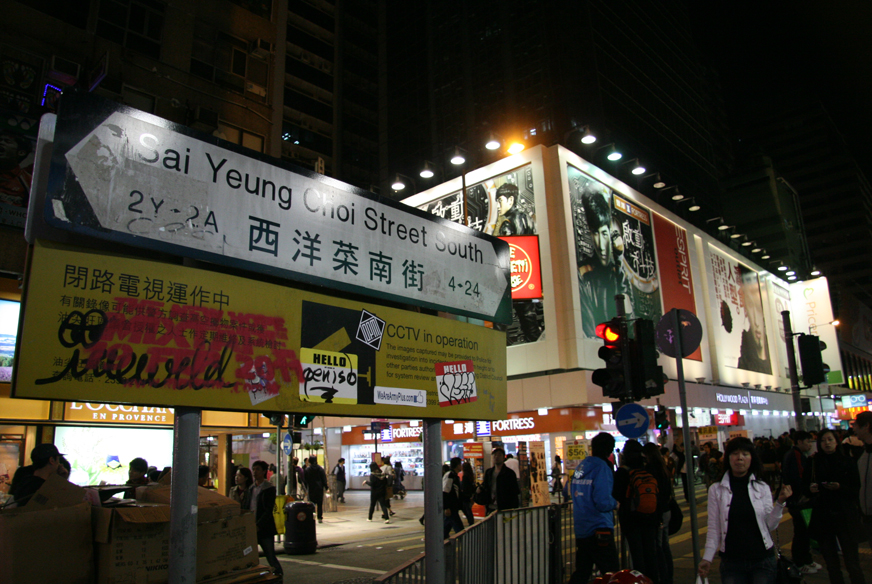 After 7:30 p.m., performers of all kinds transform the street into a giant stage. It is no longer just a place for shoppers. The sound of music produced by the street performers begins to reverberate in the air.

Every form of performance you could imagine can be found on this street. From the uplifting notes of a flute piper, to a martial arts master smashing glass bottles with his bare hands, to a guitar player singing songs which invite audience participation.

By day, these street performers may be ordinary homemakers, office clerks, salespeople or unemployed citizens wandering on the street. At night, they turn into superstars, losing themselves in the world of street performance.

Fa-jie, a 50-something homemaker, is one of the street performers on Sai Yeung Choi Street South. Apart from singing classic pop songs, she performs Latin dance or the Cha-Cha (a dance originating from Cuba) to attract a bigger audience.

Karito, another street performer, comes from Bolivia. His music is rather elegant and all his instruments are hand-crafted by himself.

Every now and then, crowds form around the performers. Curious passersby stop and stare.

The street performers do not just attract the audience’s attention. They also draw the attention of some shop owners and residents of the street who find them a disturbance.

They sometimes complain to the police, who may then ask the performers to lower the volume of the music.

Fa-jie says many shop owners or staff members have complained to the police about the volume of her performance.

“Of course our performances cannot be too loud. We may disturb those selling things (on the street),” Fa-jie says. “We will try our best to lower the volume.”

But sometimes, the performers may be driven away from the street, or shunted between venues/.

Police once asked Karito, a Bolivian musician, to leave Mong Kok and perform in Tsim Sha Tsui instead. Only to be told by police there that he should leave and play in Mong Kok.

In an attempt to accommodate the wishes of the performers and their audiences, as well as shop-owners and residents, the government launched the “Open Stage” pilot scheme last year. Under the scheme, performers can apply to perform in open spaces in the piazzas of the Hong Kong Cultural Centre, Sha Tin Town Hall and Kwai Tsing Theatre. However, applicants have to satisfy strict criteria.

They have to attend an audition and be assessed by a panel. They can only reserve the piazzas after a successful audition. Each performance should not involve more than eight performers and they must all hold valid Hong Kong permanent identity documents or valid travel documents showing that they are lawfully employable in Hong Kong.