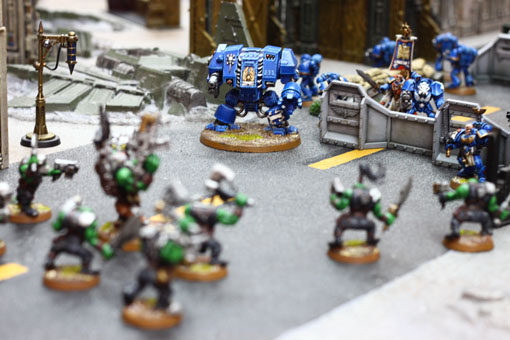 The fantasy world of miniature war games
By Derek Li

“Charge!” roars Captain Angelos while smashing an orc’s face with his raging hammer. His squad sprints and shoots, the incoming bullets falling like rain. It is a bloody battle but Angelos pushes on.

The action is taking place on a table and the soldiers are the miniature pieces or figurines of a tabletop war game.

Tabletop war games involve two major elements: the miniatures and the terrain. You can choose between a brave knight, or a gigantic beast, made in plastic or metal. By putting up a few miniature buildings, you can easily construct your battlefield. If you ever get bored with the miniature scenery available you can always craft your own.

Unlike any other games, it allows you to customize your pieces and your board. You can paint the miniatures in whatever colours and combination you like, your miniatures can reflect your style. The player has absolute control over what types of strategies and units to deploy.

However, both players will have a limit on the number and varieties of soldiers they deploy. For instance, a basic squad needs 50 points while an armoured tank unit requires 100. Once the troops are armed, they can be sent to the battlefield where the show begins.

So how does the battle start?

Each time, a player can decide their move and whether they will trigger a battle. Every unit has its walking and attacking distance. Players need to strictly respect this rule and use a ruler to measure the exact distance. Any damage and kills are decided by the roll of the dice and the randomness adds thrill and possibilities to the game. Each step requires careful planning, as it is possible to lose in just one round.

All this means it can take hours to finish one full game. So with so many alternative games around, why do people still enjoy such a long-winded and complicated game? Walker Wu Chi-fai, a dedicated player for 14 years, has the answer.

“Unlike computer games that have endings, they [miniature war games] will not die out. You can keep playing them again and again, there are regular updates [of miniatures],” says Wu.

It is not just a game but also a hobby for Wu. He meets friends with the same interest through playing. He likes the game so much that he works for a miniature shop, teaches beginners how to play and holds tournaments for the senior players.

Tabletop games require actual players to compete against each other, so what if your friends are busy?

You are never alone.

The community of miniature war games is united and you can always find somebody at Fun Atelier, a shop that sells miniatures and provides terrains for tabletop war game lovers. Players visit the shop whenever they have the time. Sometimes they come to play, or just chat with friends. Since the game originates from the United Kingdom and is played in English, some of the players are expatriates living in Hong Kong.

If you have been fantasising about being a hero and saving the planet, or if you simply love painting models, join the battlefield of tabletop war games and the hundreds of fans waiting out there.