But for Liao, voting rights are basic human rights and should be enjoyed by all residents. “There are so many of them (foreign migrants), but they can’t affect politics, so they would then be forgotten during the policy-making process,” he says. Liao says immigrants should stand up to negotiate with political parties and legislators; otherwise, their voices will be ignored.

One party that has listened to such voices is the Trees Party, founded in 2014. After being invited to attend a forum by immigrant pressure groups, the party included policies supporting foreigners’ voting rights in their election platform. Chief Strategy Officer Pan Han-shen says this was a direct outcome of the forum, but he notes the big parties do not care much about such events.

He adds Taiwan locals are more likely to support legislation to give more rights to foreign white-collar workers, but not to blue-collar workers, most of whom come from countries in South East Asia.

Most South East Asian migrants in Taiwan are foreign spouses and blue-collar workers. Lisa Huang (who goes by the name Lisa), a 28-year-old Indonesian immigrant, has lived in Taiwan for eight years. South East Asian women who are married to Taiwanese husbands, like Lisa, are commonly called “foreign brides”. Lisa, who is a mother of an eight-year-old child, says she has experienced discrimination in the workplace and in her local neighbourhood.

She recalls that she once wore mask to work at a bakery. Not knowing Lisa’s nationality, her Taiwanese colleague treated her well. Once she discovered she was Indonesian, the colleague immediately ignored her. “She told me she hates foreigners,” Lisa says. “She thought South East Asians would rob Taiwanese of their jobs and men.” She adds that her husband and mother-in-law have been asked by their friends whether Lisa is greedy for money and whether she “behaves properly”.

This kind of discrimination has hindered immigrants’ social integration and political participation. Some of Lisa’s friends have obtained R.O.C. nationality, but they do not vote, or if they do, they just follow their husbands’ voting preferences. “Taiwanese look down on us, and what we care is just to live well,” Lisa says.

Until four years ago, Lisa, like many of her peers, did not care about politics. At that time, a friend brought her to the People’s Democratic Front, an association advocating for minority rights. After she joined the association’s activities, Lisa learnt about various social issues and the significance of political participation. After understanding that issues such as food safety and her child’s education are affected by politics, she decided to get involved.

Encouraged by the People’s Democratic Front, she ran in the last Legislative Yuan election on a joint list with 44 other candidates in the Daan constituency in Taipei. Under this novel idea, 45 candidates decided to jointly ran for one seat, with one of them registering as the official candidate. In this way, Lisa could “stand” without being eligible to do so. 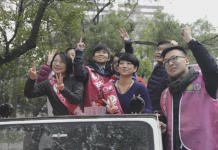