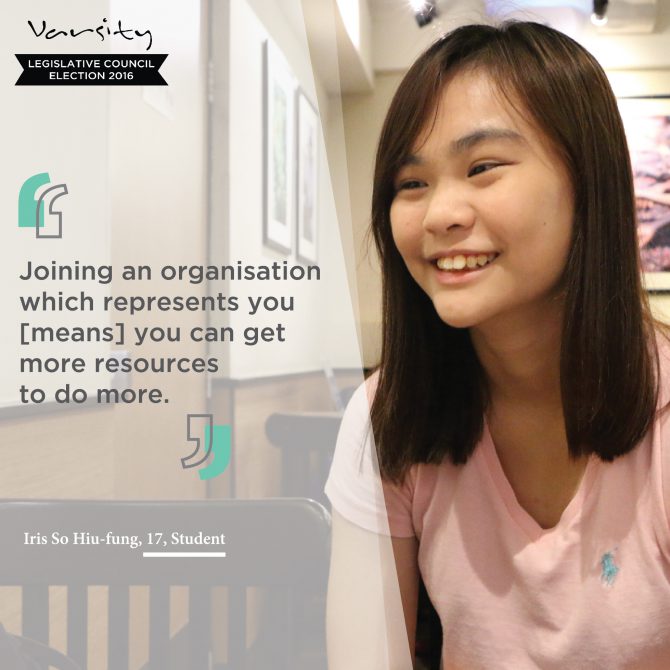 Unlike other DSE graduates who spend their long holiday travelling or doing part-time jobs, 17-year-old Iris So Hiu-fung has devoted her summer vacation to volunteering for the young political party Youngspiration.

“You can achieve more by working with a group of people who share your beliefs than doing things alone,” says So, who will be studying Journalism and Communication at Hong Kong Shue Yan University in September. “Many a little makes a mickle. Joining an organisation which represents you [means] you can get more resources to do more.”

Members of Youngpiration, a localist party formed by a group of young people after 2014’s Umbrella Movement, have been busy campaigning for the Legislative Council Election, which takes place on Sunday. The party has candidates running in the Kowloon West, New Territories West and New Territories East geographical constituencies.

As polling day approaches, So is on the streets almost every day, setting up booths, hanging banners and distributing flyers in various districts to canvass votes and spread the party’s ideas.

So started participating actively in politics after joining the 2012 anti-National Education protests. Her involvement with Youngspiration began in March this year, when she was impressed by the party’s efforts during the District Council Election in November 2015. At the time, she spoke with party convenor Sixtus ‘Baggio’ Leung Chung-hang, who was standing as a candidate at the Kwun Long constituency where So lived. As a result, she came to appreciate the party’s district work in constructing a Hong Kong identity.

“[Youngspiration members] make use of things like the Hong Kong Olympics team in Rio or the Hong Kong National Football Team’s performance at the FIFA World Cup Qualification tournaments [against China] to build up a sense of identity among Hong Kong people,” she says.

Although So currently spends all her time campaigning, she prefers working with residents at a district level. She especially enjoys talking to them face-to-face, which allows her to better understand their needs. She hopes to put in more time connecting with local communities after the Legislative Council Election is over.

“District work can be very diversified,” she says. “It’s no longer confined to just yelling through microphones or distributing handbills.”

Despite her passion and devotion, So does not have her family’s support. She says they are prejudiced against localists, labelling them as gangsters who stir up trouble for money. But after many rounds of heated rows, her family members began to respect her political views and actions. Still, they have a bottom line that she must not to get arrested.

“You’re not supposed to have a bottom line when you choose to fight,” So says. “But you have to know it’s not all about you. They are your family members. They set a bottom line because they are worried about your safety.”

Because she is still financially dependent on her parents, So gave in to her parents’ demands. “I can’t afford to take up criminal liability or pay for bail, so being arrested would jeopardize my family members,” she says. But once she becomes financially independent, So says she is determined to follow her own will.

Campaigning and fighting for her political beliefs may be tiring, but So has persevered, driven by a simple hope to make society better. Although she jokes that she has “evolved from a pig to a rioter in others’ eyes”, So says her experience in Youngspiration has taught her to think more comprehensively about her choice of words and actions.

“In the past, I thought individuals could do nothing on their own. But later, I realised that no matter how small your actions may seem, you still want to do it to the best of your ability,” she says. “That is what I learned from many different people.”