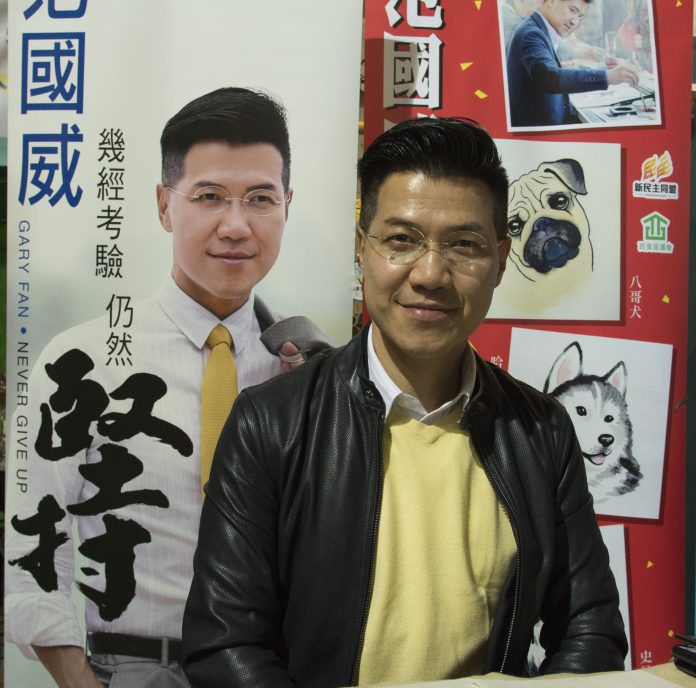 Gary Fan Kwok-wai of the Neo Democrats hopes to return to the Legislative Council in the upcoming Legco by-election in order to win back a seat for the pro-democracy camp and to fight against the disqualification of lawmakers and candidates for election.

“If the pro-establishment camp seizes the chance [to take up the Legco seat], it will legitimise the government’s action of disqualifying the lawmakers. It is not acceptable,” says the pro-democracy camp’s agreed candidate for the New Territories East (NTE) constituency.

Fan, who is a serving district councillor, also represented New Territories East in Legco from 2012 to 2016. He missed out on a seat in September 2016, losing by 6402 votes to Youngspiration’s Sixtus Leung Chung-hang. Leung was subsequently disqualified following the ‘Oathgate’ controversy.

Disqualifications have also marked the nomination period of the March 11th by-election, with three would-be candidates disqualified from standing – Demosisto’s Agnes Chow Ting in Hong Kong Island and localists Ventus Lau Wing-hong and Chan Kwok-keung in NTE.  Fan believes these disqualifications have brought his message and the political lines between the two main camps into much sharper focus.

He says the pan-democrats’ primary election has been an important mechanism to coordinate candidates from the pro-democracy camp, to avoid vote-splitting and tackle the “fragmentation within the democratic parties”.

Should he win on March 11th, Fan says his primary battlefields will be the co-location arrangement for the Express Rail Link, the National Anthem Law and Article 23.

As for work at the district level, Fan wants to focus on improving the links between policies decided at central level and work done at the district level. He believes that developing grassroots democracy has taken on a more important role after the pro-establishment camp amendments to the Legco rules of procedure, and as a way to counteract what he calls “authoritarian oppression”.

New Territories East has attracted the greatest number of candidates in the by-election, one of whom is Nelson Wong Sing-chi, a former Democratic Party member. Fan predicts Wong’s involvement will affect the outcome of the by-election to some degree.

”When more people join [the race], the effect of vote splitting will be more serious… regardless of whether the competitors have departed from the democratic path or only claim to be democrats without the public’s recognition,” he adds.

Fan hopes the Neo Democrats’ work at district level will win him votes from supporters of the pan-democrats and some localists, although he concedes it is impossible to gain all of Sixtus Leung’s votes on polling day.

In the meantime, he is not worried the recent fatal bus accident in Tai Po and the Chinese New Year will divert people’s attention from the by-election as there is still time.

“When the time is getting closer to March 11th, people’s attention will focus back onto the by-election,” he says.