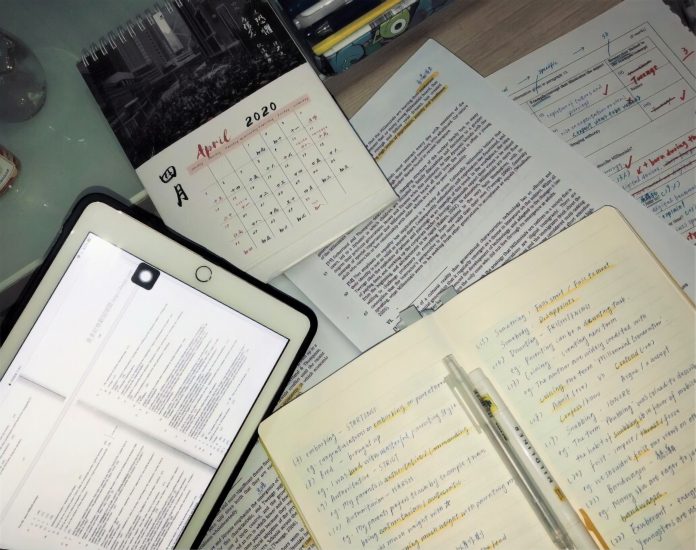 DSE candidates of this academic year face unprecedented pressures and fears amid the COVID-19 pandemic and prolonged social movement.

Pearl Chan, a Form Six student, burst into tears after her mother had told her the news about postponement of the Hong Kong Diploma of Secondary Education (HKDSE) examination when she was revising.

“I have to endure another month of stressful wait before I can be free from the examination,” she sighs.

On March 21, Secretary for Education Kelvin Yeung Yun-hung announced the DSE examination, which was originally scheduled to begin on March 27, would be pushed back by four weeks to April 24, considering the increasing number of confirmed COVID-19 cases in Hong Kong.

More than 50,000 students sit for the examination which is administered by the Hong Kong Examinations and Assessments Authority (HKEAA). Oral examinations in Chinese and English are also cancelled. Weighting of oral examinations is reallocated to other sections of examination papers. The announcement came one week before the original examination date of the first subject – Visual Arts.

“It’s really hard and stressful. I am counting down to the examination but all of a sudden I have to do revision for another month,” she says, “I would rather get through this earlier.”

It’s really hard and stressful. I am counting down to the examination but all of a sudden I have to do revision for another month.

Having no choice but to plan her revision schedule again after the unexpected announcement, Chan is frustrated about uncertainties of the examination arrangements brought by the pandemic.

In a press conference on April 15, the education minister said: “After reviewing the latest situation and seeking advice from the Centre for Health Protection, the Education Bureau and HKEAA have decided the DSE written examinations should begin as planned from April 24.” He added that examination results would be announced on July 22.

Yeung said that the HKEAA would implement a series of contingency and precautionary measures, such as requiring candidates to check their body temperature and sign the “Candidate’s Declaration Form on Health” on each examination day.

The bureau has prepared three backup plans in case situation in Hong Kong worsens. The examination could be postponed to May 22 or if necessary, to June 11. The last resort would be cancelling the examinations and students would be assessed based on school performances.

Chan, who is planning to study in Taiwan, worries that she will not be able to file her application, pointing out the deadline for application of undergraduate programme in Taiwan is July 18. (The results will be announced on July 22)

“If the release of DSE results has any further delay or the schools in Taiwan do not postpone their application deadline, I will have to plan my study all over again,” says Chan, “Now I have to immediately think of programs I want to study in Hong Kong.”

Chan also thinks cancelling oral examination is unfair to students. “I think the result cannot reflect the ability of students comprehensively, especially for those who are better in speaking and communication skills,” says Chan.

Losing the ambiance of a physical examination

Other than facing pressure from the sudden delay of the examination, students do not even have the opportunity to rehearse for the public examination this year.

“It doesn’t feel like having an examination in a hall,” says Chan. She finds the experience is far from having a real examination, because she does not have to check if she has brought her admission form, identity card and stationery before leaving home, which is an important part of rehearsing for the DSE examination.

“Since we are doing it online at home, we do not have to care about all the details such as bringing the necessary items to the exam venue. And we are more at ease,” she says.

Although students received marking schemes from their teachers after the online examination, not all teachers prepared sessions to explain questions and answers. “I did not learn a lot from this mock examination,” says Chan, “Even I have all the answers, it does not mean I understand reasons behind mistakes I made.”

Even I have all the answers, it does not mean I understand reasons behind mistakes I made.

Without a proper mock examination, Chan feels she is under enormous pressure. The DSE examination results can determine her future in the coming years, yet she cannot do proper preparation before sitting for the examination. “I feel disoriented and not prepared for the examination at all,” says Chan, “It’s like I don’t have anything in control.”

“Most students actually know the answer, but they don’t know how to present it well in order to earn marks according to marking scheme prepared by HKEAA,” says Li, “There is a problem with online teaching. I cannot see my students’ immediate reactions and thus I have no idea whether they understand or not.”

I cannot see my students’ immediate reactions and thus I have no idea whether they understand or not.

Li agrees without experiencing the atmosphere of a physical mock examination, students have a harder time to get ready for the DSE examination. “Apart from their ability and knowledge, their mental state also greatly influences their performance,” says Li.

The coronavirus outbreak undoubtedly has affected the mental condition of most candidates. DSE takers this year have also been emotionally disturbed by the anti-Extradition Law Amendment Bill (anti-ELAB) movement since June 2019.

An 18-year-old DSE candidate who names herself Bertha participated in the movement from June to December 2019, when most tutorial centres were packed with students preparing for the DSE examination.

Although Bertha enrolled in English and Economics mock examinations provided by a tutorial centre in December, she was not ready for any of it. “I was frightened and I followed news about the movement every day. I felt very exhausted so I basically did not revise during that period,” says Bertha.

I was frightened and I followed news about the movement every day. I felt very exhausted so I basically did not revise during that period

Bertha and her friends kept checking their chat group every 30 minutes to update each other’s status. She was very worried as she witnessed her friends being arrested before.

“I felt so helpless that there was no progress (in the movement),” says Bertha, “I even thought would the DSE examination be cancelled?”

It was a tough struggle for Bertha forcing herself to return to her study routine in December. “I felt so ashamed when I started picking up my study,” says Bertha, “Should I really revise? Or should I go out to support other protesters?”

Hsu Siu-man, a coordinator of Hong Kong Federation of Youth Group (HKFYG), says students are more sensitive to the sanitation of exam venues this year. They worry about setting of examination halls, health condition of students sitting next to them, hygiene of toilets and water fountains at schools. “This gives them extra burden on top of pressure they already have from their study,” says Hsu.

Hsu says this academic year, which started rough with social movement and immediately followed by the coronavirus outbreak, is “very unusual” and thus supporting these students is especially crucial.

HKFYG and Faculty of Education of the Hong Kong University jointly establish a platform on Telegram for Form Six students to answer their questions on 11 subjects. The group also collaborates with some major tutorial centres to provide tips on past examination papers and revision. To show emotional support, former DSE candidates are invited to film video clips sharing their advice. The organisation gives out hand-written cards with supportive messages as well.

Hsu advises students to focus on their goal, be clear of their progress, and most importantly, seek help from others when facing difficulties.