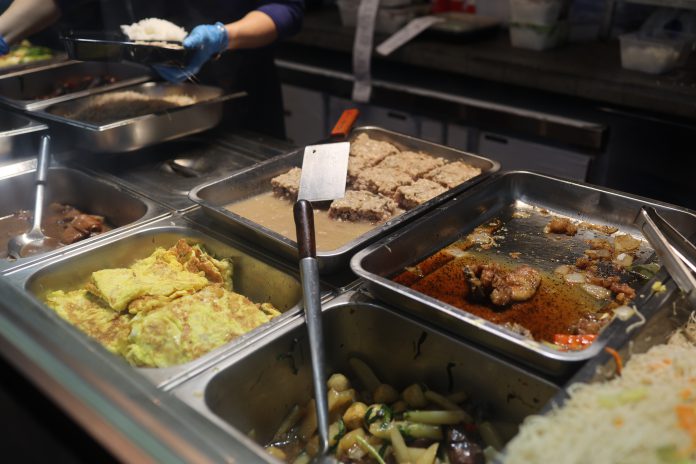 Takeaway shops selling rice with two dishes are thriving amid the pandemic.

While the catering industry is struggling to survive in the pandemic, some start their business selling takeaway meals with rice and two dishes to turn misfortune into fortune.  One of them is Hong Kongers Family Food (香港人兩餸飯), a family-run food business which opened in September 2021.

Tsang’s family operated a takeaway food shop selling rice with two dishes in Tseung Kwan O for two years until July 2021. They now continue running it in Quarry Bay, where many offices are located, due to lease expiry.

“Our shop is mostly visited by white collar workers. During lunch hour, there is always a long queue outside our shop,” Tsang says.

The number of food factory licence applications increased from 1,528 in 2019 to 2,021 in 2021, according to the Food and Environmental Hygiene Department. All takeaway eateries selling rice with two dishes with no seating are required to apply for the food factory licenses.

It took half a year for Tsang’s shop to apply for the license. “We hired a license consultant to help us with the license application so the whole process was easier,” Tsang says.

“Our shop is in a small alley whereas other takeaway shops are in the main street. In the first month, we did not earn much as not many people noticed our shop,” Tsang says.

“We joined different food delivery platforms and launch new dishes every month to attract and retain customers. Gradually, the profit grows. Our turnover is now over HK$100,000 every month,” she adds.

Wong says 5,000 Facebook users requested to join the rice with two dishes concern group within ten days after the government announced banning dine-in services after 6pm in restaurants on 5 January.

“I think takeaway food has become popular mainly because of the government ban on dine-in services after 6pm. Many people get off from work late, so they tend to buy takeaway food,” Wong says.

Wong recalls he had rice with two dishes at a factory canteen for the first time when he was a Form Seven student working as a summer part-timer in Ngau Tau Kok.

A map of takeaway shops selling rice with two dishes with information about pricing and shop location is created based on information Wong gathered from his Facebook group members.

The cheapest meal plan of rice with two dishes is sold at HK$17, while the most expensive one costs HK$55. Sham Shui Po, Yau Tsim Mong and Tuen Mun districts are the districts with the most takeaway food shops, according to the map.

“A lot of people want to know whether there are any takeaway food shops near their neighbourhood. The Facebook group can provide them with this information,” he says.

“I am motivated to run the group as rice with two dishes connects people with different backgrounds and political stances, allowing them to communicate without hostility,” he adds.

Wong also shares a dish picking tip. “It is wiser to order meat patties or steamed fish. The shop operator cannot secretly give you less portions as the customers can count the number of meat patties and fish in their meal box,” he says.

Leung Chung-hei, a 29 year-old driver, joined the group in December 2020. He says he did not consume rice with two dishes frequently before the outbreak of COVID-19.

“I eat it more often during the pandemic because there are more shops selling rice with two dishes which provide consumers with more choices,” Leung says.

Leung takes pictures of rice boxes he bought and shares eateries information in the Facebook group. “My favourites are chicken wings and fried chicken with lemon sauce,” he says.

Cheap price is another reason why he consumes rice with two dishes more frequently.

“Nowadays, it costs at least HK$40 to buy a lunch box with only one dish from a fast food chain restaurant. It is wiser and cheaper to buy rice with two dishes from takeaway shops,” Leung says.

An affordable option for grassroots

“The demand for rice with two dishes has indeed increased under economic recession. The salary of the grassroots has been reduced and the minimum wage has not been reviewed for three years. Their income cannot catch up with the inflation rate,” she says.

“The demand for rice with two dishes has indeed increased under economic recession. The salary of the grassroots has been reduced and the minimum wage has not been reviewed for three years. Their income cannot catch up with the inflation rate,” she says.

Lau points out many low-income households working in retailing, catering and construction are troubled by unemployment, underemployment and leave without pay during the pandemic.

“Working mums have to stay home looking after their children as online lessons are conducted. They cannot work to make money,” she says.

“As the government banned dine-in services after 6pm, there are more takeaway shops selling rice with two dishes at a cheap price. Grassroot customers find it more cost-effective to buy takeaway than cooking at home,” Lau adds.

“The choice of dishes matters most. If we select two dishes with high calories, we may gain weight,” Lee says.

Lee says the best combination for a rice box with two dishes is to order one vegetable dish and one meat dish.

“Mushrooms, broccoli, celery, tofu and bitter cucumber are good choices. Also, avoid choosing fatty meat like meat patties and beef briskets, lean meat such as fish and chicken fillet would be a healthier choice, “she says.