The reluctance to interact with people who are different can extend to those from “privileged” racial backgrounds. Anna Gustafson, a 19-year-old journalism student at Hong Kong University recalls how a room fell silent after she entered for a university orientation camp event. The local students had assumed she would not want to interact with locals.

As a white person, Gustafson says she certainly feels that she is treated differently, but apart from being overcharged at the wet market, it is never negative. On the contrary, she feels awkward when people praise her light skin and blonde hair. “Everyone wants super white skin,” she says, noting Hong Kong still feels very Eurocentric.

The experiences of these interviewees suggest that when it comes to racial boundaries in Hong Kong, people from different ethnicities have different experiences. Hong Kong Unison, a charity that advocates for the rights of Hong Kong’s ethnic minorities, conducted a Survey of Racial Acceptance in 2012.

Hong Kong Unison’s advocacy approach focuses more on policy and tackling racism on a political, rather than individual level. Kayla Tam, the group’s campaign officer, says most community services tend to be short-term and have limited reach. “When you try to change things on the policy level, that trickles down and it also raises a standard for everybody,” she explains.

Hong Kong Unison was one of the groups that lobbied for a Race Discrimination Ordinance, which was implemented in 2009. Implementation of the legislation is overseen by the Equal Opportunities Commission (EOC). But Tam says the EOC’s complaints system is underused.  In 2015, only 61 of the 714 complaints the EOC received were related to racial discrimination.

“Not many people have the resources or the time to go through with [the complaint]. The process is often quite frustrating for the complainants,” says Tam, whose organisation often represents clients and handles a number of cases that go to the EOC. Another issue is that complainants are usually pitted against big corporations or their employers. “The power dynamics are quite off-balance,” she adds.

Of the 54 complaints the EOC investigated in 2015, more than half were dropped due to the complainants’ wishes or a lack of evidence.

Despite the difficulties, some are willing to persist in fighting the discrimination they encounter. Matthew Timothy Corbin, a 25-year-old African American dancer and choreographer was turned down by three successive landlords while flat-hunting with his boyfriend over the summer.

The first time, Corbin saw a listing on Facebook and contacted the agent. The agent texted him to ask where he was from and what race he was. When he replied that he was African American, the agent rejected him, saying the landlady would not rent to African Americans as the last time she did so, the tenant did not pay his rent on time.

The second time, communications online with the agent went smoothly. On the day they went to see the flat, everything was fine when the landlady chatted with Corbin’s boyfriend in Cantonese as they walked up the stairs. However when she noticed Corbin following and realised they were renting the flat together, she immediately said no. “It was a two bedroom apartment so two people [renting it] makes sense. It is really about my race,” Corbin says.

The third attempt was no better. Corbin tried to rent a village house in Yuen Long but was told by the landlord: “I am sorry but I just don’t want to rent to you.”

He reported the first two cases to the EOC about three months ago and is waiting for the results of the investigation. The process may take a long time. The EOC usually tries to achieve conciliation between the parties but Corbin hopes to take the case to court.

“I expect to win,” he says. But even if he does not, he hopes his case can raise awareness and ensure racial discrimination is not swept under the carpet. “People will reevaluate what they are doing and realise that they may have this bias but that’s illegal. There are real consequences for discriminating against race. I want people to feel empowered to fight against discrimination. Even if I lose, if I can get the stories out there, I will be good,” says Corbin. 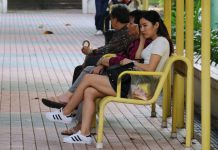