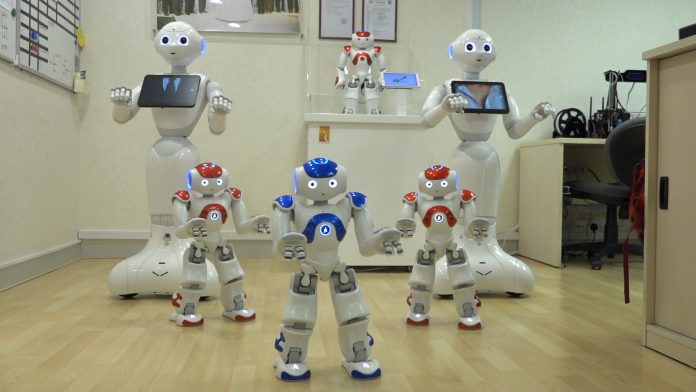 In the past, robots were mainly used for industrial purposes. They were primarily designed to undertake repetitive, tedious work, such as assembling product parts. But with greater integration of more advanced artificial intelligence, they are now able to perform many functions that we once thought could only be done by humans, such as interacting with people.

Professor Li Xiang, a faculty member of The T Stone Robotics Institute of The Chinese University of Hong Kong, envisages the robots of the future will have a higher degree of autonomy. Unlike in the past when scientists had to design everything for a robot to work, Li says robots will eventually be able to determine their own actions in an unknown environment.

Win Win Group is the distributor of humanoid robots, NAO and Pepper. Its Project Manager, Samuel Wong, says the development of robots is a long, continuous process of improvement. He says that at the current level of technology, his robots are usually applied at the service level. They can provide entertainment and information for customers. However, the scope of their functions depends on what they are specifically programmed to do. So customisation is required to cater for the needs of each customer.

Such customisation has been made for the NAO robot in a Central District branch of the Bank of China (BOC). Named RoBOC, after BOC, it is programmed to answer more than 6000 enquiries from customers in three languages – Cantonese, English and Mandarin, as well as provide entertainment. Its database enables it to answer questions ranging from stock prices to directions for nearby locations.

The RoBOC is still a work in progress and Rocky Cheng Chung-ngam, General Manager of Information and Technology of the BOC, says it takes time for the robot to learn in order to expand its database.

“The more it can learn, the bigger its knowledge base, the higher its intelligence,” says Cheng.

Unlike in countries such as Japan, the use of robots is still a new idea in Hong Kong. Cheng says that it takes a long time to look for robots that can understand Cantonese, the native language of the city. He thinks that a precise recognition of speech and faces is crucial to making it convenient for customers to give banking instructions to a robot. As for  the idea of humans being replaced by robots, Cheng says it is unlikely this would happen in the next few years because it takes a long time for a technology to mature. Besides, he adds new technologies often give rise to new industries that can create job opportunities.

Kam Mong Restaurant in Mong Kok is the first restaurant in Hong Kong to use robots to serve customers. The restaurant’s three robots have made the news and boosted business since they were first introduced in August, 2016. However, General Manager Billy Chan Chi Ming thinks their positive impact can be attributed to their use as a marketing gimmick rather than to their functionality. He says there are a lot of unknown situations in a Hong Kong diner (Cha Chaan Teng) which robots might not be able to deal with, such as remembering the preferences of regular customers.

What’s more, he adds, emotions and the human touch are missing in robots – it’s always more hospitable to have humans serving customers than robots.