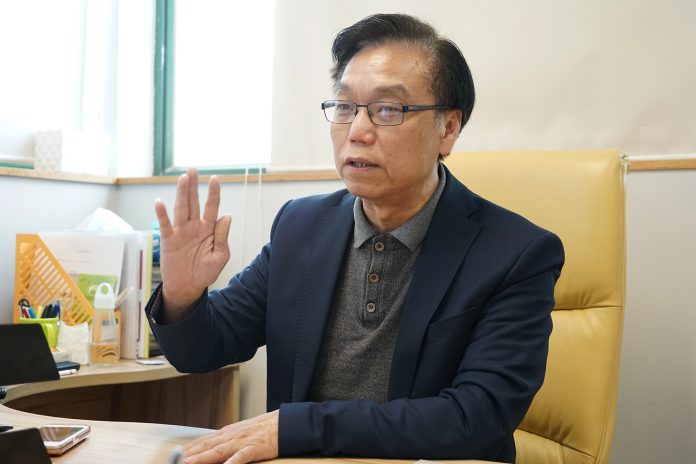 Former Democratic Party member and lawmaker Nelson Wong Sing-chi raised eyebrows when he donned an Ultraman costume to campaign in the New Territories East Legislative Council By-election in 2016. Wong says it was his team’s idea, he never quite liked it and is going back to basics this time around.

Apart from turning his back on superhero costumes, Wong is running as an unaffiliated candidate in Sunday’s by-election in the same constituency. When he ran in 2016, it was as a member of the centrist party founded by former Civic Party lawmaker Ronny Tong Ka-wah, Third Side. That time, Wong came in fourth, losing to eventual winner Alvin Yeung Ngok-kiu of Civic Party by 143,585 votes.

Wong started his political career as a social worker in the Northern district in 1983, working with the poor, the elderly and the youth. His says his experience in social work has allowed him to better understand community needs.

His campaign slogan this time is “The courage to choose rationality” (選擇理性的勇氣) because he wants to remind citizens to be rational.

In the six years since his completed his previous term of office in the Legislative Council in 2012, some lawmakers have used more radical means such as filibustering and physical actions to fight for their goals Wong does not agree with these tactics.

“We can use these radical means but it should not be the only way. Communicating and compromising are keys to achieve the goals,” he says. “If we refuse to communicate [with the government], we will never be able to achieve our goals and help citizens.”

Wong says negotiation and communication with the government have been crucial to his work in Northern District. The most memorable achievements in this work being helping to establish the Northern District Hospital in 1994, and tackling the flooding problem in the district.

He faces fierce competition in the race for the New Territories East seat but Wong says his biggest challenge doesn’t come from the other candidates, but from voters’ attitudes. He thinks today’s voters cast their ballots according to which camp a candidate is affiliated to, without paying attention to their work and platforms.

“I have to make voters understand that voting for a candidate based on just which camp they belong to is not a good thing for Hong Kong, it is irrational and emotional behaviour,” he says.

Without any party affiliation and backing, he admits he faces a tough fight but insists there is still a chance. “I am the best choice,” he says, citing his 35 years of experience in politics.

If elected, Wong says he would advocate for the expansion of the Northern District Hospital and setting up of medical centre at district level to tackle the current overcrowding problem in public hospitals. He adds he would also work on reactivating the political reform process.