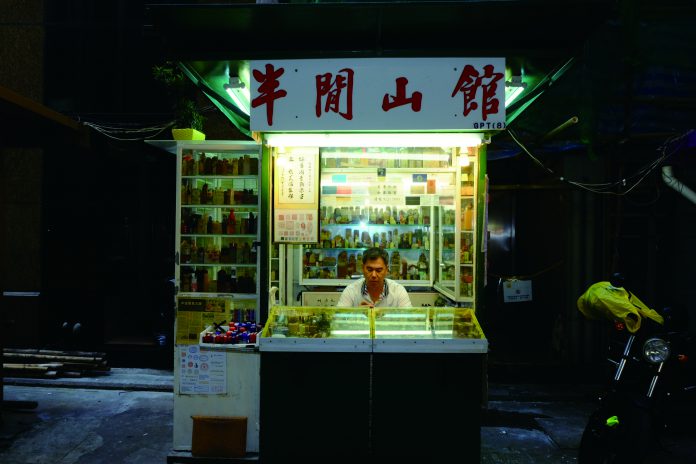 Man Wa Lane, also known as Chop Alley, is a tiny pedestrian lane in Sheung Wan lined with stalls of chop makers. It is where Pun Han Sin Koon (半閒山館) — which translates into “laid-back mountain hut” — sits with its wide display of traditional Chinese seals. Ng Kam-chun, the 60-something owner of the stall, refers to himself as a “laid-backer”. “Our predecessors hoped that in this industry we could enjoy some free time while earning a living. Isn’t this lifestyle delightful?”

You may have seen Ng’s artwork without realising it — the red chop in fifteen-fold seal script on Standard Charter’s 2010 edition of HK$100 banknotes was in fact his work. Ng was 16 when he entered the industry as an apprentice in a printing house in Macau where he learnt various engraving and printing skills. In 1989, after nine years of apprenticeship, he moved to Hong Kong because the market here was more diverse.

“In Hong Kong, we carve in numerous languages such as Chinese, English, Japanese, Russian, and Thai,” Ng explains. He says traditional chops are more formal and require higher crafting skills, whereas making modern chops allows for more creative flair. “We want to have a fusion between Chinese and Western cultures,” he says. “There are fewer rules and limits now…when you express ideas through carving, it’s just like making layouts.”

Even though automated rubber stamp-making technology and machines exist nowadays, Ng believes hand-carved Chinese seals can never be replaced. “You’d know the difference between hand-written fonts and computer-generated ones. Handmade chops have human spirits in them,” he says. “Things don’t have to be rigid and static. Be more flexible and you will have lots of variation.”

Ng’s carefree spirit helps him enjoy making creative chops for children and foreigners. Sometimes he helps foreigners translate their names into Chinese, and also combines cartoon patterns onto the seals for children. He is such an experienced craftsman that he can draft his designs on the spot and modify them until customers are satisfied. From experience and reading calligraphy books, he is also aware of the cultural preference for how names appear on seals, which affects how he utilises the space aesthetically.

Ng believes the philosophy behind Chinese seal-making is “respect the job and have fun with it.” After working for nearly four decades in the field, he is still eager to learn. “Every day is a challenge, but that is where my skills come from,” he says.

To customise your own Chinese seal, be it for an official purpose or for fun, visit Pun Han Sin Koon at GPT8, Man Wa Lane, Sheung Wan, Hong Kong Island.