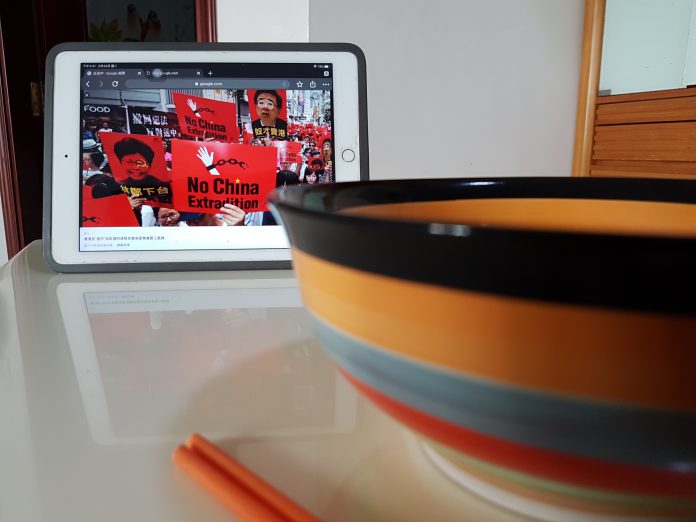 Betty, a 20-year-old student majoring in sociology, and her younger sister found it increasingly difficult to communicate with her parents who bitterly oppose the anti-Extradition Law Amendment Bill movement (anti-ELAB) since June 2019.

The Year 2 student, who declines to reveal her full identity, did not have dinner at home for two months after the social unrest broke out last summer. “My relationship with my parents was on the brink of collapse. They said I was not their daughter and did not let me go home. I went out the whole day to avoid facing them,” Betty recalls her ordeal with her parents.

The impact of the large-scale social movement spills over to family relationships, as heated debates over differences in political views and the protests are tearing families apart.

Betty says she argues with her family about the political stance. “My parents think fighting for democracy upsets social stability. They label protesters as rioters who have ruined the city,” she says.

The conflict Betty has with her parents is not an isolated case. According to a survey conducted by Hong Kong Federation of Youth Groups (HKFYG) in October 2019, 42 per cent of 300 respondents aged 18 to 29 said they often argued with their parents in the past six months, among which 70 per cent said the main reasons were the recent social events or difference in political stance. About 31 per cent of another 302 respondents aged 54 to 73 in the same survey said their family relationships had deteriorated since last June.

Views from opposite sides

Betty’s parents think fighting for democracy is unnecessary, and they think it is meaningless to set up road barricades and join a strike. But Betty believes that when the government does not respond to peaceful protests, a citywide strike can be used as a bargaining chip for political demands.

With a preference for local and international news over news in mainland China, Betty says the only channel for her to know about issues in China was during Liberal Studies lessons in secondary school. She recalls learning news about the Chinese milk powder crisis and corruption cases of mainland authorities which shapes her negative perception about China.

Growing up in the Mainland and Hong Kong with different life experiences affects ways of thinking, Betty says. Her parents are Chinese immigrants with low education level and limited knowledge about freedom and democracy. But Betty grew up and is educated in Hong Kong. She has been exposed to these concepts at a young age.

“My parents are brainwashed by the communist party into believing that Chinese-style governance is great.”

While some parents do not share their children’s views and oppose to political participation of any kind, some parents show understanding and support peaceful protests.

A 40-year-old father of two children, who names himself David, says he supports the use of peaceful means to express political views and his children have been taking part in human chain activities, but he finds behaviours like vandalism and desecration of the Chinese national flag unacceptable.

David, working in the logistics sector, has frequent contact with colleagues who are from mainland China. He thinks most Hong Kong people misunderstand China as an uncivilised country.

“Over the past decades, China has been developing at a fast pace, but Hong Kong has made no progress.”

He adds that the young generation hopes to restore the British colonial rule because they hate the Chinese identity.

David thinks that his children have wrongly interpreted the concept of democracy. While he thinks fighting for democracy triggered social instability, his children think it is good for the whole society. “The younger generation overestimates the power of democracy and freedom, but in fact both are not the panacea for all social problems,” he says.

“No matter which side my children stand for, I hope that they can distinguish between right and wrong rather than following the social trend blindly… They (children) do not have to accept my views. I only want them to figure out the truth and to understand the complexity of a society,” he continues.

According to the same survey conducted by HKFYG, while youngsters ranked freedom as the most important core values, their parents considered social stability as the top priority. Among all respondents from two age groups, 70 per cent believed that difference in values was the main reason for intergenerational conflicts.

Explaining the result, Beji Ho San-moon, researcher of the Youth I.D.E.A.S. and Youth Research Centre of the HKFYG, says, “Every generation has its own values, opportunities and standard of life. These shape paths that individuals take and their attitudes towards society.”

Apart from personal beliefs, Ho also attributes intergenerational conflicts to difference in the sense of identity. He says while the older generation generally recognises themselves as Chinese, the younger generation tends to be more diverse and they label themselves as “Global Citizen”; “Hongkonger in China” or a “Hongkonger”.

Agnes Ku Shuk-mei, associate professor of Social Science at the Hong Kong University of Science and Technology (HKUST), shares Ho’s view. She says that different generations hold different values due to different experiences. This explains why parents argue with their children over the social movement.

Ku explains that baby boomers who have enjoyed the post-war fruits of prosperity and stability are likely to uphold a conservative outlook in favour of stability above all, while youngsters born in a more affluent society tend to embrace their individuality and post-materialist values.

She says that most parents embrace stability and the idea of “openness”. “Most of them experienced economic hardship in the 1950s and 1960s. They believe that society has a relatively open structure that allows social mobility, and everyone can climb up the social ladder through hard work.”

Unlike the older generation, Ku thinks young people do not believe in upward social mobility today. “Young people see inequality in society. Employment opportunities are not very promising and social advancement has become difficult,” she says. “They turn to collective action and increasingly adopt radical means, as seen in the recent anti-ELAB movement.”

She adds that the former has strong ties with China, while the latter seeks to separate themselves from the Chinese identity and connect with the rest of the world.

She observes that a sharp sense of localism has emerged among the young generation recently as reflected in the significant presence of young protesters in the anti-ELAB movement. The young generation emphasises individual autonomy and core values that separate Hong Kong from China to resist the integration between the two. “Such a trend of localism reflects the mistrust in the existing political system,” she says.